Sodium, in the spotlight for next week's #NephJC, part 3

The last article in NEJM's remarkable sodium package is an extraordinary analysis attempting to estimate the number of deaths that can be attributed to excess sodium intake.

These studies came from 66 countries representing 74.1% of the adult population. It is appropriate to whistle and say wow, at this point.

After estimating the effect of sodium on blood pressure, they then used the blood pressure data to estimate cardiovascular mortality based on the work done in two large studies (Study 1, Study 2).

Estimated global sodium intake was 3.95 g per day, quite a bit lower than the 4.4 grams measured in the PURE studies. They pointed out that 99.2% of the countries surveyed had mean sodium intakes higher than the WHO level of 2 grams a day. An astounding 88% of the world had sodium intake more than 50% over the WHO recommendation.

Their meta-analysis found that systolic blood pressure fell 3.8 mm Hg for every 2.3 grams sodium intake was reduced. This translates to a more interpretable 1.6 mm Hg for every gram reduction in sodium. This is quite close to the 1.5 mm Hg found in the PURE analysis. They used 2.3 grams because that is equal to 100 mmol of sodium, for people who like to speak like a chemist. 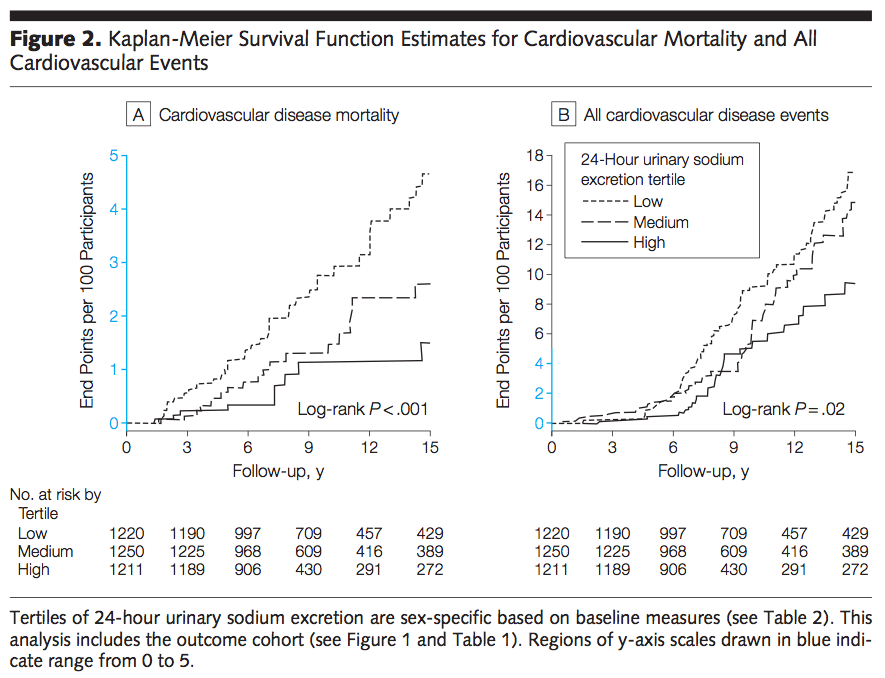 Note that, these figures come from a 2011 prospective trial published in a little known journal called JAMA. This signal that low sodium diets may not be beneficial is not new or unknown. It was picked up by the Institute of Medicine in their summary and recommendations to avoid very low sodium diets:

However, the evidence on health outcomes is not consistent with efforts that encourage lowering of dietary sodium in the general population to 1,500 mg/day. Further research may shed more light on the association between lower—1,500 to 2,300 mg—levels of sodium and health outcomes.

This becomes even more concerning when looked at through the lens of the PURE studies in the same issue of The Journal that show average sodium intake to be associated with the lowest mortality and danger rising on either side of the sodium consumption curve. 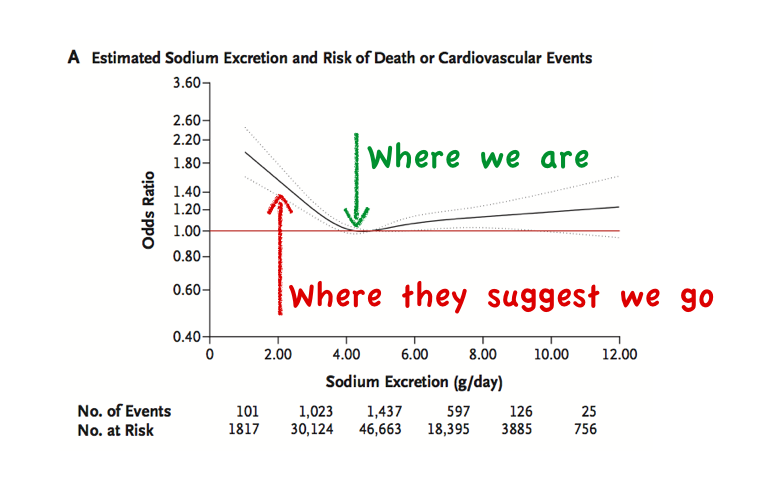 This is a study best taken with a grain of salt. Couldn't resist.
Posted by Unknown