Videos for patients and by patients

This is my go to video for helping patients make decisions on what modality to choose.

I can't recommend the video enough. In this age where everything is sanitized and abstracted as much as possible this video is just authentic. It's as real as it gets. To me it brings to life all of the little things we ask dialysis patients to do, from waking up early, to restricting fluids, to spending 12 hours a week in a recliner hooked up to a machine with only one hand free.

Everyone should watch it.
Posted by Unknown

I was invited to speak at the Canadian Society of Nephrology last fall. Swapnil set up a talk on social media. My first international speaking gig. Very cool.

We have two associates out on Maternity leave and another key partner retired a couple of months ago, so practice is tight. No way I could take half a week like I do for Kidney Week. I left for my 1:30 talk at 8:30 that morning. Direct flight from the D to Montreal. As I'm walking through the airport I'm looking for nephrologist ads. During Kidney Week there will always be a big a pharma company advertising in the airport. I love seeing those ads and trying to imagine wha percentage of the general population have any idea what Samsca™ or Aranesp™ are. Montreal had none of these advertisements. I took a taxi to the Hotel Bonaventure.

Kidney Week is a major international conferences. I heard more foreign languages in Philadelphia last Novemebr than I heard at CSN which was being held in Montreal. We often associate size with quality but thie would be totally unfair to CSN. The lectures were amazing. They absolutly stand toe to toe with the quality you get at Kidney Week. Of course, there are some Canadian specific lectures that didn't interest me, but the general nephrology content was excellent. Five lectures in particular were amazing:


Murtagh is quite prolific. Is planning an RCT to look at onservative care vs dialysis in edge cases. http://t.co/IlP4czPkKq #csn15
— Joel Topf (@kidney_boy) April 25, 2015


Their were also a few debates. I was disappointed that I had to choose between GN and the hypertension debate. It sounds like it was outstanding:


Con: Quinn demolishing AASK: if U ACHIEVE a low BP (regardless of Rx) less progression. But if U TARGET lower BP, there is no diff. #csn15
— Swapnil Hiremath, MD (@hswapnil) April 25, 2015

Swapnil and I did our social media session.

The talk was broadcast live on Periscope. So 21st century.

The plan was a one-two punch, where Sawpnil presented why you should engage with social medi,a and I followed with a "how to" engage in social media. It went well. I had some trouble using Keynote on the iPhone app to advance the slides. I used Keynote on the iPhone to control Keynote on my computer. It worked perfectly during my (admittedly abbreviated) practice sessions and for about half my presentation before it crapped out. I need a more reliable solution, please tweet recommendations. The AV-guy was pretty good at picking up my signals to advance the slides but it wasn't natural and threw my rhythm off. I'm Sorry Canada, I could've done better. That was another difference from ASN. At CSN they had no trouble wiring in my MacBook Air to their AV set-up. Much slicker than the MUST USE POWERPOINT party line from ASN.

I'll post the slides when I get a chance, but first I need to add a slide crediting @Doctor_V and Howard Rheingold, who involuntarily donated ideas to my talk. And I want to pump up the Who to Follow section with a description of mining Symplur to find thought leaders. I also need a slide telling people about Twitter4Nephrons.

In the end, I had a great time at CSN and would definitely go again; maybe not next year in Halifax, but why don't we meet the year after in British Columbia?

The ASN is waking up to social media

The ASN has long had a Twitter account but it was infamous among the nephrologists of Twitter as being a oneway mode of communication. A fact that was lampooned on the ASN Bingo board. Getting a reply from @ASNKidney was a badge of honor. 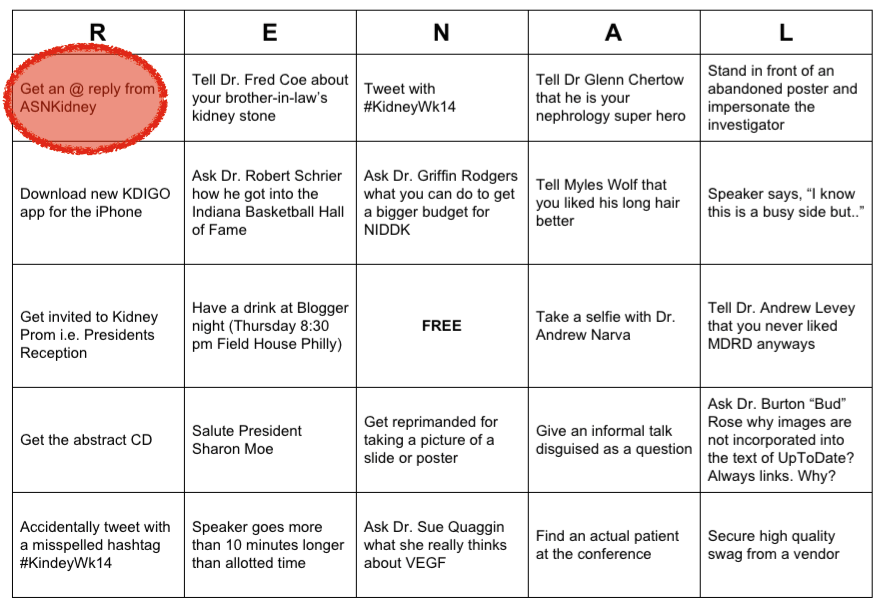 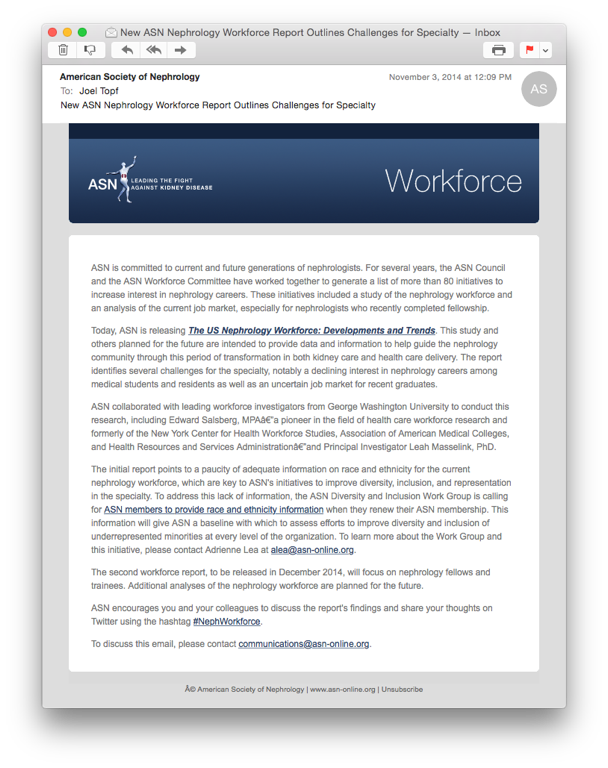 While complaining about how the leadership at the ASN just doesn't get it was a great parlor game among the renal bloggers, things began to change. In the Fall of 2013, Sarah Faubel called me to ask if I thought we could do a social media symposium at Kidney Week 2014. This materialized as the Tweets, Likes, and Blogs: How to Use Social Media for Your Patients and Your Benefit session. See recaps here and here.

Even before the session other things were changing. In early November, the ASN sent out it's first Work Force Task Force Report. In the e-mail that announced it, they asked people to discuss the report on Twitter with the hashtag #NephWorkForce.

It was the first time I had seen a hashtag come from ASN. The community was ready to talk and we had a great discussion about some of the issues, but strangely there was no participation by the ASN leadership. MGKatz said it best:

But ASN was not foolish, just cautious. They were testing the waters. When the second Work Force Report was published they had Mark Parker available for a formal tweet chat and he was gracious enough to answer questions from me to knock together a table setting blog post. Again there was spirited discussion, and ASN was actively participating.

In mid February-Dr. Faubel drove one of the NephJC on NephroCheck. She suggested the article, wrote up the introduction and was one of the primary tweeters during the chat. Dr. Faubel is the chair of the ASN AKI Advisory Group. Jay Koyner, another member of that group also joined the chat.

ASN then organized a pre-World Kidney Day chat with leaders from the NKF and ISN. Deidra Crews was the representative from ASN for that chat. This chat was amazing with incredible participation from industry, government and all three major real professional organizations. The ASN no longer looked like a reluctant partner but was driving the conversation:

Tomorrow the ASN will continue this trend by hosting a chat about the upcoming ASN Hill Day, where ASN goes to the nation's capitol to talk to our elected leaders about how the government can help kidney patients. The ASN is sending three representatives to chat about the event:
This should be an interesting chat about something that I have only thin knowledge. Please join the chat at 9PM EDT, hashtag #ACT4Kidneys

We have been calling for ASN to join the social media revolution, now that they've awoken we need to do our part to make this partnership meaningful and productive.