When a non-clinician tells you AKI is simple, prepare for disappointment.

Things that seem like they should work often don't. Just ask Perry Wilson.

And even the most predictable cases of AKI are resistant to intervention. Look at bypass surgery. We know days in advance the time and place the AKI will occur and despite that foreknowledge, like Cassandra, we are powerless to prevent the AKI. Same with contrast administration (or not). Same with AAA surgery. We have been unable to meaningfully reduce the rate of AKI in any clinical circumstance.

AKI is a tough nut to crack.

So when I read about this guy, Mustafa Suleyman (Twitter), telling the public that,


"There are around 1,000 people a month dying needlessly. This is a huge hidden killer. It costs more than breast cancer care in the UK and [AKI] is super simple to prevent."

I'm insulted, like we must be idiots that we haven't fixed this yet. And thank-god the computer scientists are here from Google to finally cure AKI for us.

Turns out the National Health Service is implementing a system at The Royal free Hospital to speed alerts to doctors so they can react quickly to signals of acute kidney injury. The headlines being generated from this project are amazing: 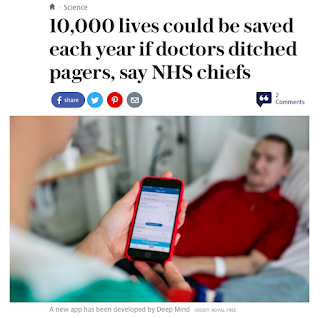 The company providing artificial intelligence is DeepMind, a Google company. The product that detects AKI early enough to avoid it is Streams.

Maybe we should excuse the visionary of an artificial intelligence company. The medical director of the Royal Free should be a bit less grandiose and more evidence based. What did he have to say?


Stephen Powis, medical director at the Royal Free said, “We know that a quarter of deaths from acute kidney injury are preventable if clinicians are able to intervene earlier and more effectively.” 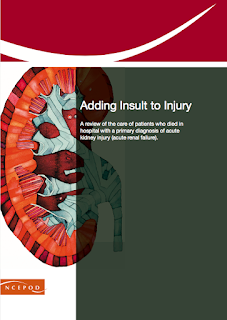 Boy, that sounds like data that comes from an interventional trial where warnings were given to some clinicians and others did not receive them and the RR for AKI was 0.75. Unfortunately, this study has never been done. When a similar study was done by Perry Wilson they found no effect at all from early warnings. When I asked Med Twitter if they knew where this data came from I was given a few old retrospective trials.

Nothing prospective. Nothing to justify the certainty of Dr. Powis. The 25% comes from a report produced by NCEPOD called Adding Insult to Injury. The report attempted to analyze all of the deaths for 3 months in 2007 due to AKI. They failed to capture surgical patients and they did not get the records on 40% of the cases they requested.

As part of this examination of the failures they asked experts that reviewed the case files if the AKI was avoidable and they said yes it was in 14% of the cases. I'm sorry, but the distance between a reviewer believing an episode is avoidable and an AKI case actually being avoidable is more than a casual step, let's call it a major leap. Remember that reviewers were only reviewing patients with mortal outcomes. Given that, the reviewers knew of the subpar outcome, I'm not surprised the reviewers found lots of substandard care: 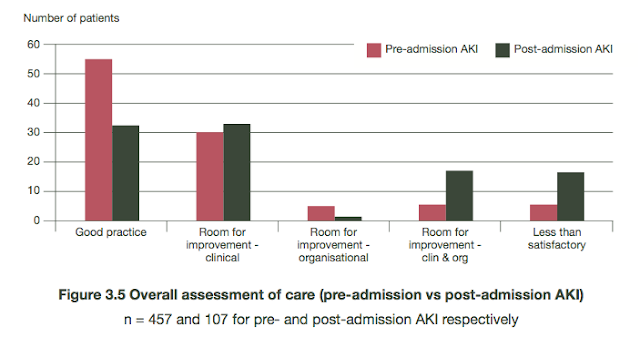 Maybe I am jumping the gun and the Deep Mind notification system, Streams has been prospectively vetted and shown to improve outcomes. I also concede that it is likely that the system can improve the number of AKIs but that isn't and shouldn't be the sole goal of the system. AKI is an intermediate outcome. The system should be judged on its ability to reduce mortality and here I am skeptical. I suspect the AKIs that are simple to avoid are not the ones driving the high mortality levels.

I believe the Deep Mind people have this type of model of AKI: 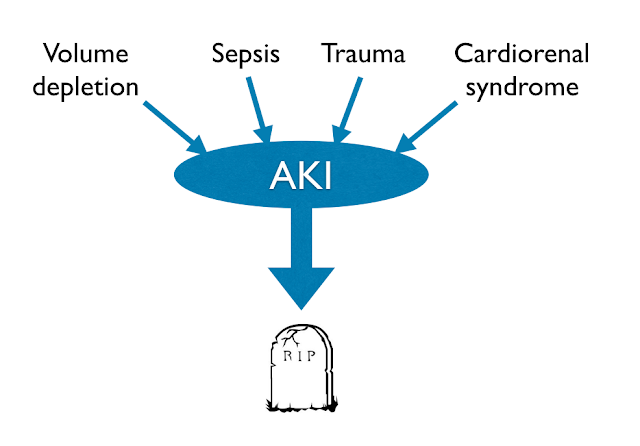 In this model, all the different etiologies of AKI feed into a single pool of undifferentiated AKI and measures that reduce the incidence of any of the causes of AKI will reduce the fraction of patients that die of AKI.

I think the correct model of AKI is more like this: 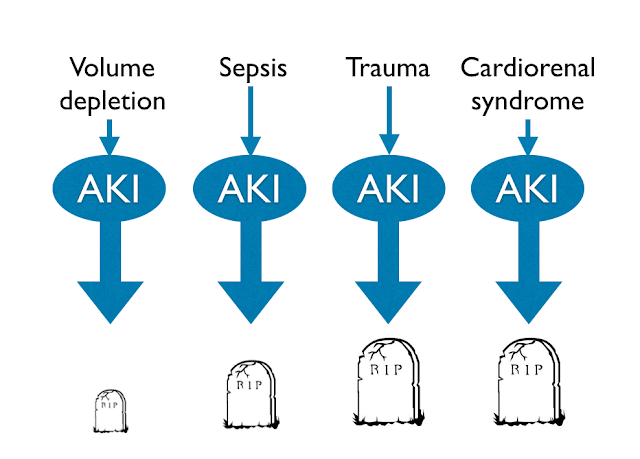 In this model each etiology of AKI leads to mortality in it's own lane. So changes in the incidence of AKI from volume depletion can only reduce the already low mortality from that cause of AKI.

I look forward to seeing the results of this project and hope that they are measuring the outcomes and plan to publish their prospective and interventional data.

I have been following the research of McDonald which repeatedly showed no signal of contrast nephropathy when looking at large databases.

This was just a curiousity that felt like the work of magician because no matter how many different ways that McDonald et al tried to prove there was no contrast nephropathy, I had seen it with my own eyes. I had seen young people with a normal creatinine who were completely stable go for a contrasted CT scan and then spiral into renal failure in subsequent days. No one could convince me that this was incidental renal failure. Renal failure just doesn't happen like that.

The best I could do to explain away the work of McDonald was to say that she is a radiologist so it must be biased in favor of her procedure/specialty. I know this is weak sauce but the I had seen it with my own eyes could not be silenced. Then Chertow. Here was the most prominent nephrology clinical trialist of our time coming to the exact same conclusions as the radiologists.

...the incremental risk of AKI that can be attributed to radiocontrast is modest at worst, and almost certainly over- estimated by patients, physicians, surgeons, radiologists, and other decision-makers.

I have been trying to reconcile this cognitive dissonance and this is where I am. The decision to use changes in creatinine to define contrast nephropathy results in a definition that captures lots of false positives.


Definition of contrast-induced nephropathy (CIN): impairment of renal function defined as either a 25% increase in serum creatinine (SCr) from baseline or 0.5 mg/dL (44 µmol/L) increase in absolute value, within 48-72 hours of intravenous contrast administration.

Note that unlike definitions of other entities like hepatorenal syndrome, there is no exception if there is alternative explanation for the renal failure. Any patient with sepsis, hypotension, and a complete breakfast of aminoglycosides, ketorolac, and ramipril that happens to get a contrasted CT scan followed by a bump in the creatinine is another case of contrast nephropathy. Though being admirably sensitive, this definition is wildly non-specific.

How about the interventions we do to reduce contrast nephropathy:
This looks like a pretty good recipe for avoiding AKI in general.

I wonder, if we were to do a careful analysis of contrast nephropathy cases where we excluded every case that could have an alternative explanation of AKI, to produce a cohort of people with a very low rate of false positives. How different would the risk factors for contrast nephropathy look like in that cohort? I suspect contrast nephropathy would look more like an idiopathic condition.
Posted by Unknown