New slang for the fractional excretion of urea: febun 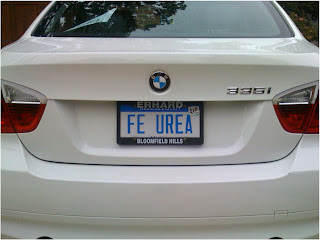 Last month on vacation, we had dinner with an old friend from medical school, now a hospitalist outside Atlanta, and she started talking about ordering febuns. I asked her what a febun was and she explained the fractional excretion of BUN. Ahhh.

My wife, who hated driving my car with the license plate FE UREA immediately declared febun both cute and the official title, at least in the Topf household.
Posted by Unknown

The commenters nailed it.

He had primary hyperparathyroidism and went for a parathyroidectomy. The recurrent laryngeal nerve was severed during the procedure and that left him unable to speak.

He suffered in silence for 6 months before going for a procedure which pushes the vocal cords on the paralyzed side medially. This allows the normal cord to meet the still paralyzed, but medially displaced cord and phonate.
Posted by Unknown 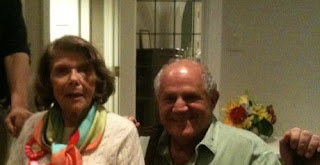 I was at my great aunt's 90th birthday party on Tuesday and was chatting with a neighbor. He mentioned that after being treated for kidney stones he couldn't speak for 6 months.

My face screwed up as I tried to figure out what the hell he was talking about. His next sentence explained everything.

Other hints: his stone were conventional calcium oxalate stones, and he had recurrent stones.

The iPad is screaming out for a system to make interactive content designed for that intimate touch based user interface. 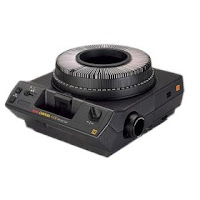 Powerpoint is a computerization of the old-fashioned photographic slide. This metaphor is continued down to the presentations being called decks. The iPad needs a presentation software as slick and versatile as Powerpoint and Keynote are but is constantly aware that the audience is a single person rather than a room. With that knowledge of an audience of one the program should explode interactivity.

Audience response systems can be grafted on to slide decks but questions and interactivity should really be central to the iPad presentation experience. Change the presentation from a slide show to an exploration.

I don't think it was a coincidence that Steve Job reminded everyone of HyperCard during his interview with Walt Mossberg at the D conference. I don't think it was deliberate name dropping but rather he had been spending a lot of time thinking about the strengths and weaknesses of that technology because he is guiding and overseeing the development of a similar technology to be authored on Macintosh's and consumed on iPads.

This program should be akin to Garageband, iDVD and Keynote. Consumer grade software that allows an amateur to produce pro-level documents. Imagine using an interactive iPad program is the followng situations:

All of this could be done with Objective-C but the idea would be to expand the market of content creators from sophisticated programmers to the entire universe of knowledge workers. Done right this would create an explosion of iPad specific content. and hopefully relieve med students of the endless dreary morning reports and noon conferences.

Reading David Pogues review of Google App Inventor, it sounds like Google stumbled out of the gate. Let's see if this rumor is Apple's counter punch.
Posted by Unknown