How much sugar is dissolved in your blood?

How cool is that, the entire blood volume has a single teaspoon of glucose dissolved in it.
A can of Coke has 8 teaspoons of HFCS 55
Hat tip to Michael Eades
Posted by Unknown

Email ThisBlogThis!Share to TwitterShare to FacebookShare to Pinterest
Labels: fructose

lowest FeNa I have ever seen

I was consulted on a patient with autoimmune hepatitis and acute kidney injury. The patient has ascites and was admitted with a small bowel obstruction.

I'm not sure if it is actually the lowest but it is remarkably low:

I assumed a urine sodium of 5 mmol/L

This is 4 molecules of sodium excreted for every 10,000 filtered. Amazing.
Posted by Unknown

I wrote an article for this month's news letter for my practise, SCSP. I wrote it on the work I did for my grand rounds. Enjoy.

in 1964 Walt Disney purchased The "It's a Small World" ride from the New York World's Fair. It became a staple of the American experience and became as beloved a part of Disneyland as mouse ears. In 2007 the ride had to be refurbished, in part due to the increased average size of passengers. The boats had been built for men weighing 175 pounds and women, 135 pounds. The overloaded boats were now routinely running aground in shallow areas, delaying the ride and frustrating patrons.

While this seems to be an innocent anecdote on our expanding waist sizes it serves to remind us that we are different than we used to be. The diseases of today have not always been with us. Obesity is not the only disease of indulgence which newly plagues us. Diabetes and hypertension were both rare diseases at the beginning of the twentieth century: Hypertension used to occur in 6% of adults; it now attacks a third. Diabetes was a one in a thousand diagnosis, now it is found in one fifth of hospital admissions.

These three diseases: obesity, diabetes and hypertension lie near the origin of the major health challenges facing our civilization.

One explanation of why these diseases emerged in the last 100 years is the fundamental change in our diet: a dramatic increase in the amount of sugar we eat. In 1700 Europeans ate one pound of sugar a year. Americans now eat 80 pounds a year.

Table sugar, sucrose, is a disaccharide, which means it is made from binding two simple sugars together: one molecule of glucose and one of fructose. Glucose is the simple sugar our body is tuned to use. The carbohydrates found in breast milk, lactose, is 50% glucose. Every tissue of the body is able to turn glucose into energy, in fact, glucose is the only carbohydrate the brain can use as a fuel supply.

The other half of sucrose, fructose is less useful than glucose. It is only metabolized in the liver. Glucose metabolism is a tightly regimented, stepwise process. Meticulous control is maintained over the breakdown of glucose at three separate steps in its initial metabolism. Fructose, on-the-other-hand, enters the liver and is consumed as fast as possible. The liver goes crazy over fructose and metabolizes it in a haphazard and unregulated process. Since the energy is produced without immediate need, a lot of the metabolic energy is directed into storage, which in the liver takes the form of triglycerides and fat. Fructose consumption leads to non-alcoholic fatty liver disease and has surpassed alcoholism as the number one cause of hepatitis.

The fructose consumption also increases the production of uric acid and raises serum uric acid level. While classically, uric acid is associated with gout, it is increasingly being accepted as a cause of chronic kidney disease and hypertension.

Fructose appears toxic and we are eating more than ever. But there is general confusion about the source of fructose in our diet. High fructose corn syrup was introduced in the 60's and has increased from non-existent in the food supply to an average annual consumption of about 40 lbs a year. HFCS replaced sucrose in both Pepsi and Coke in 1984. HFCS is largely found in two varieties: HFCS-42 and HFCS-55. The number indicates the percent of the which is fructose, 42% in the former and 55% in the latter.

Regardless of which variety of HFCS one encounters, they all have roughly the same amount of fructose as common table sugar. Despite the scary sounding name, HFCS does not contain any more fructose than your sugar bowl. We are eating more fructose than ever but it not because of HFCS, it is because we love sweets.

Email ThisBlogThis!Share to TwitterShare to FacebookShare to Pinterest
Labels: fructose

My first shot at a nephrology checklist

This month I am attending on the dialysis floor. As you can imagine it is a high volume experience with a lot of patient turnover. Patients get admitted from six or seven large dialysis units around the area and our group alone has a dozen nephrologists. This leads to communication problems. Coordinating care with the dialysis units, the outpatient nephrologists, the specialists and primary care docs; it can be overwelming.

This checklist actually acts more as a list of important contact numbers for each patient. Gawande, specificaly mentions that improved communication is one of the key ways that checklists improve outcomes.

At the bottom are some basic items that all dialysis patients need and can get missed on a busy service.

It is all contained on a 3x5 card.

There is some great stuff in there. This line on the futility of cancer screening among dializers struck me as particularly interesting:


[Kajbaf et al.] calculated the maximum increase in life expectancy (for a 60-yr-old woman) from routine Papanicolaou (Pap) testing and mammography to be 3 and 2 days, respectively.

I feel like dialysis is always geting beat up over the high yearly mortality rate, and admittedly it is high. So it was interesting to see this table of some other conditions and there associated mortality. I didn't realize dialysis had such familiar company.

The highest aldosterone I have ever seen 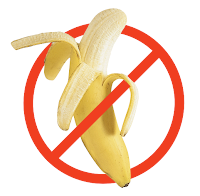 Patient came to me with hypokalemia and hypomagnesemia. She had been asymptomatic when she underwent routine pre-op labs for an elective procedure. Her potassium was 2.0 and the magnesium was later discovered to be 0.9 mmol/L.

She had been treated for 5 months with supplemental potassium and magnesium before she found her way into my office.

During her initial work-up we found:
Her blood pressure was 120s over 80s on 5 mg of amiloride daily. Her volume status appeared essentially normal.

No renal vascualr disease by MRA, normal CT scan of the abdomen (no renin producing tumor). She was not on aldactone.

The principle characteristics of Gitelman's are: low potassium, low magnesium, initially presenting in adolescence or adulthood. Patients have normal growth. Blood pressure is low. When I first learned about Bartter's and Gitelman's I imagined them as congentital diuretics:

The conditions can be understood nearly completely with this crude model. They both have low blood pressure as can be expected from a diuretic-like action. The low blood pressure triggers the renin-angiotensin-aldosterone system resulting in high plasma levels of renin and aldosteronism. In primary hyperaldosteronism, renin is suppressed.
Increased distal delivery of sodium along with increased aldosterone levels leads to increased potassium and hydrogen wasting leading to metabolic alkalosis and hypokalemia. 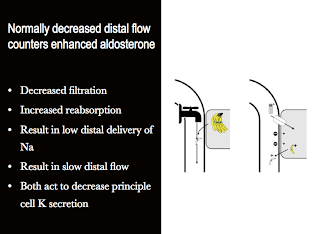 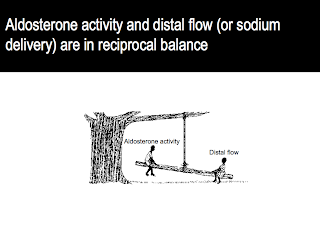 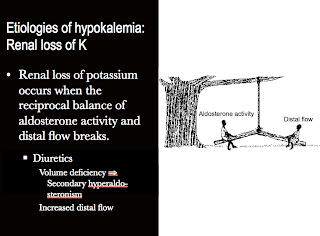