So Pi Day is just about over but during the day we did a three stooges around the Topf household. After taking the pie to the kisser I wrote a check to the National Kidney Foundation of Michigan for $31.41.

I'd like to challenge Matt Sparks, Kenar Jhaveri and Edgar Lerma to take pie and write a check.

Resources to help you publicize #NephMadness

I did a quick 10 minute presentation at morning report for the residents to get them excited for NephMadness.

NephMadness: What's up with that? from joel topf on Vimeo.

Only eight more days. Get those entries in!
Posted by Unknown 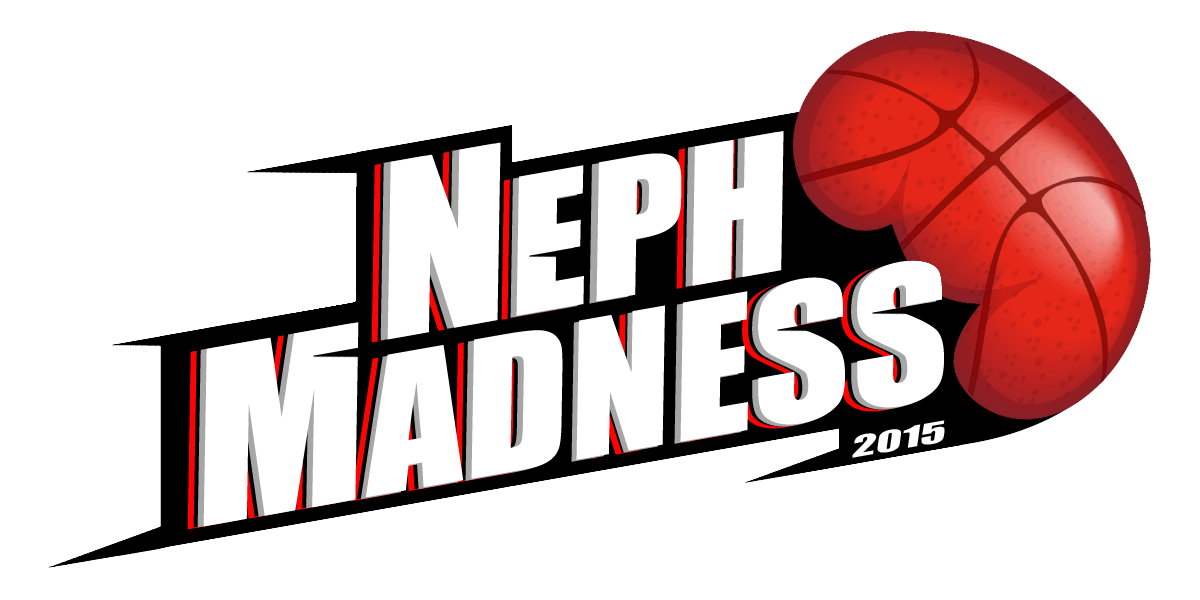 for the third time. This began as a last minute Hail Mary by the crew at AJKDblog to commemorate World Kidney Day in 2013. The response was so overwhelming that despite initially thinking this would be a one-and-done we decided to come back and improve the idea.

We have steadily improved the execution of NephMadness.

Last year we introduced a system to allow online bracket submissions. We found a company that provides white labelled online tournament brackets. This gave us streamlined registration and allowed for automatic scoring. Participation sky rocketed. Last year we also brought in content experts to act as our selection committee to make sure we had the best field possible.

This year, we have a number of further improvements. The primary complaint last year was seemingly arbitrary way the winners of each match up were determined, basically it was a system we called "Matt and Joel decide." Not surprisingly people were not enamored with this system and this year we have deputized a blue ribbon panel of nephrology experts to make the decisions.

We are also getting better at producing the brackets themselves and filling out the field. We now have written on 192 concepts since we started NephMadness. We have seen that the best match-ups pit related concepts up against each other and we have really increased the use of that technique in this year's brackets. In addition we have themed the entire tournament as nephrology's interaction with other specialties.
We have also changed the schedule. The first two years we tried to track the schedule of March Madness as closely as possible. This meant we opened the brackets on Selection Sunday and closed them a week later. This year we opened the brackets on March 1 and accept submissions for 3 weeks, until March 22. This will, hopefully, increase participation.

Another area of improvement is in the Tourneytopia rollover descriptions. Last year we just copied the scouting reports from AJKDblog and pasted them in to the roll overs. They had a bunch of links and were really long. This resulted in really long descriptions that were difficult to read in the rollovers. This year we have a short 2-3 sentence description for the rollovers written solely for that purpose. Oh and a picture.
Last year we had a confusing collection of three sites, Tourneytopia, NephMadness.com and AJKDblog. This year we jettisoned NephMadness.com and completely redesigned AJKDblog to be a much more effective container for NephMadness. The editorial staff at AJKD really did an outstanding job with the redesign. 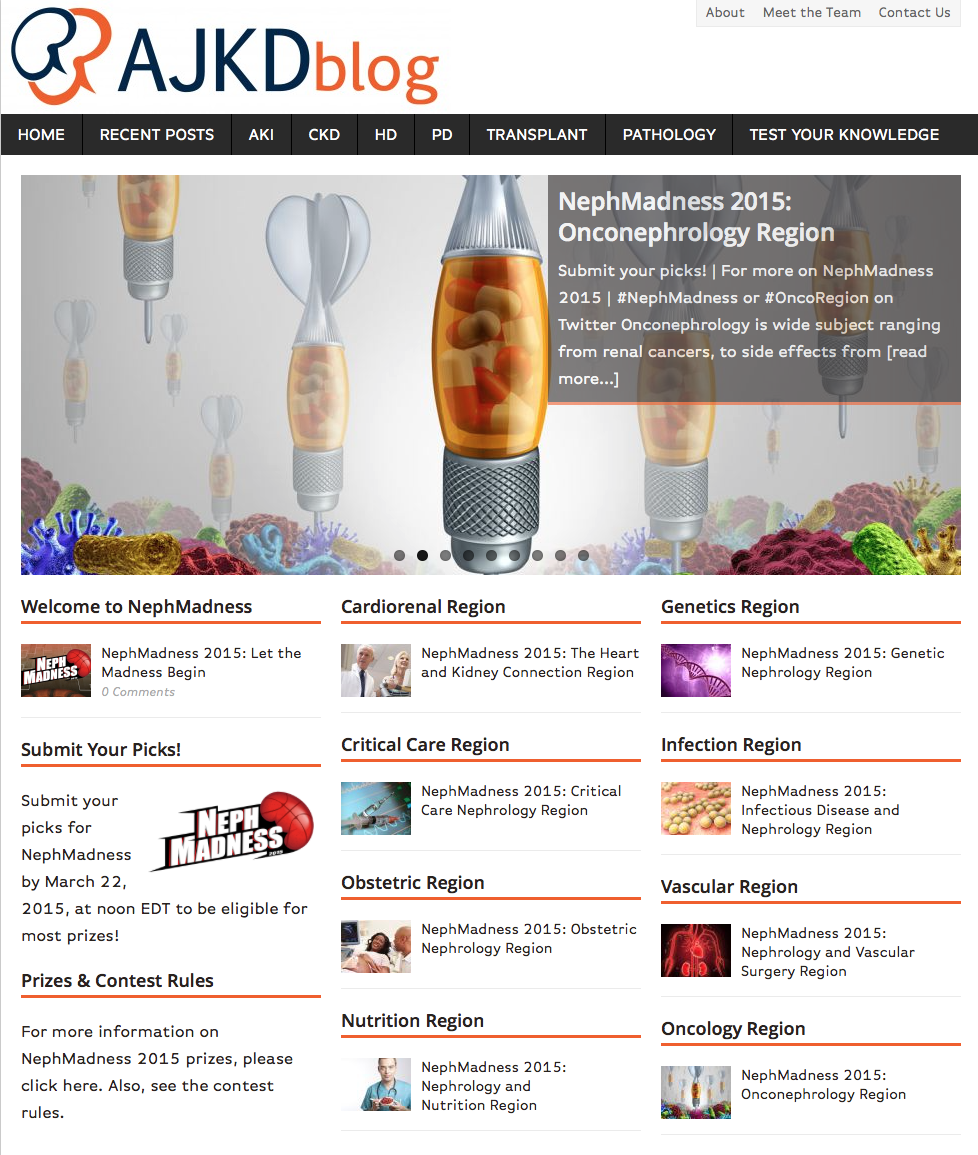 This year the journal, AJKD, is really behind the contest. The Feb and March issues of AJKD had pack ins to promote the contest.


And the journal website has two high profile ads for NephMadness. 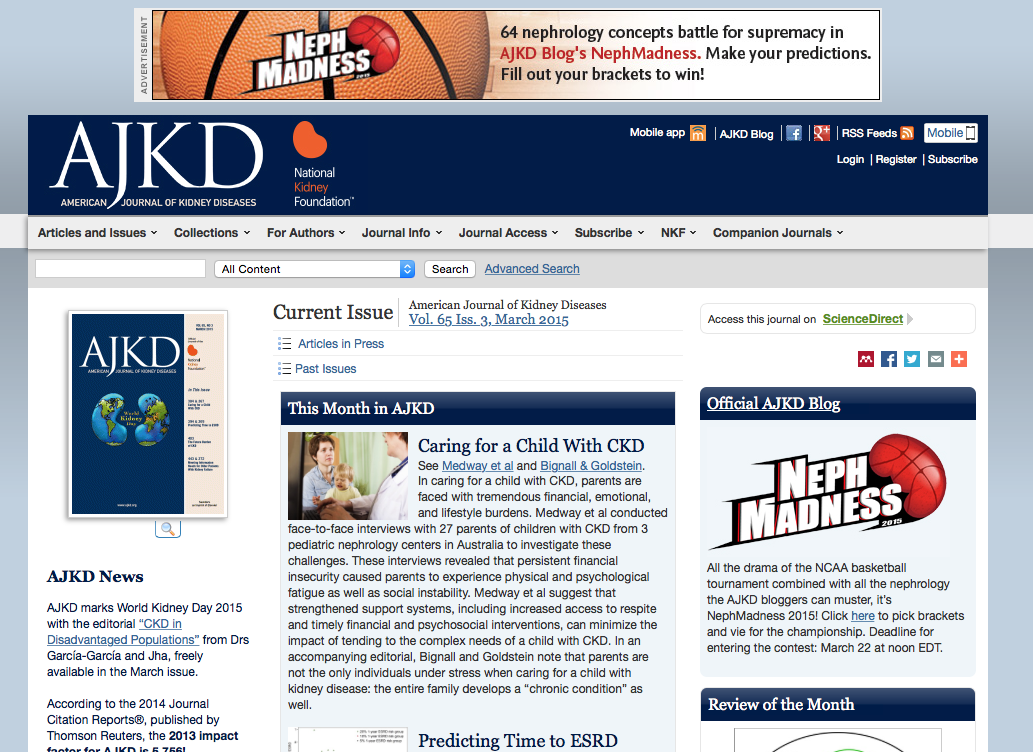 The last change is we are partnering with MedScape, a long time partner with the NKF and AJKD to promote NephMadness. Medscape is republishing all the content from the scouting reports and e-mailing their audience. 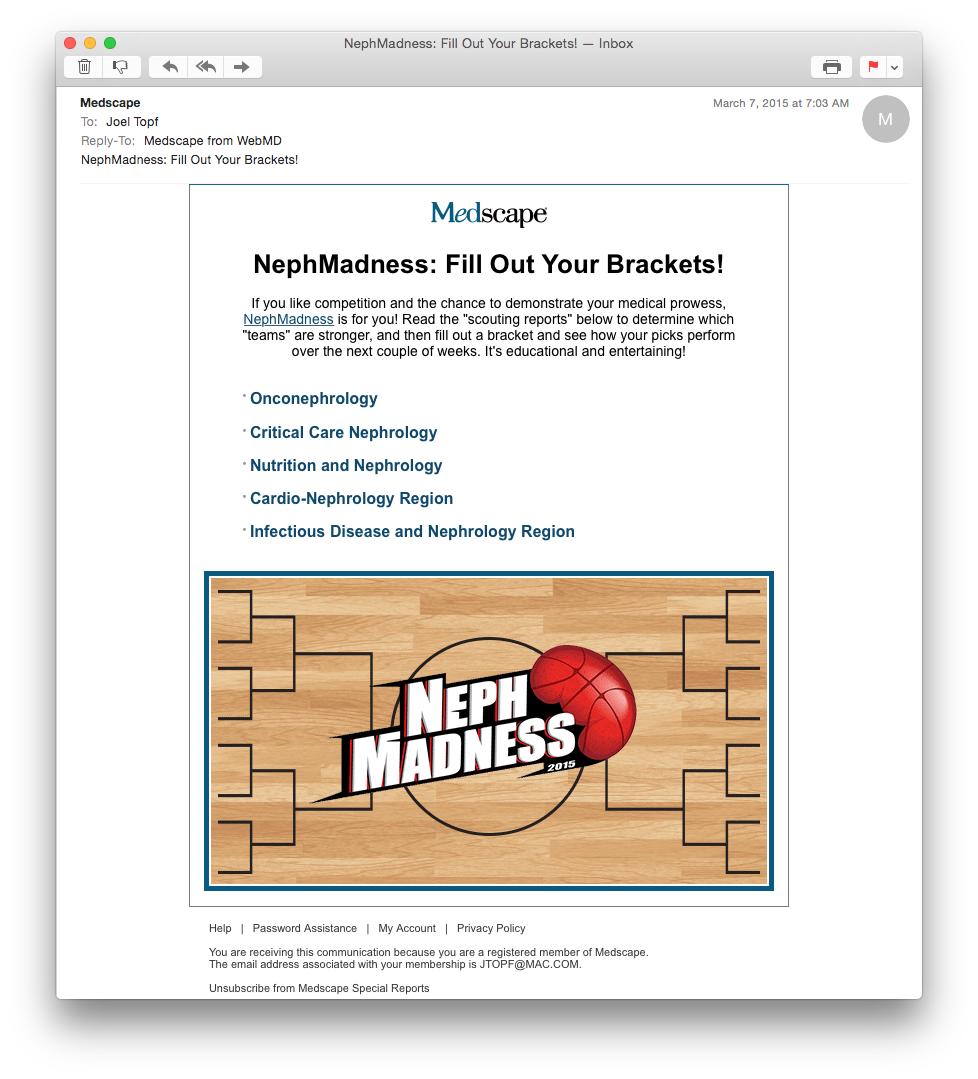 At St John Hospital and Medical Center we are having all of our fellows and faculty complete their own brackets and then we will have a consensus conference and build a collective entry to see if we can do better as a pit crew or as lone cowboys (and cowgirls).
Posted by Unknown