Sodium, in the spotlight for next week's #NephJC, part 2

The second article in the NEJM package was Urinary Sodium and Potassium Excretion, Mortality, and Cardiovascular Events.

This is an interesting study because so much of the arguments based on salt focus on the intermediate end-point of blood pressure, one can lose sight on the big daddy, total mortality. Previous studies have shown that low sodium diets have paradoxically been associated with higher rates of cardiovascular disease and death. These studies have often been dismissed by sodium puritans by pointing out that including patients with pre-existing cardiovascular disease will pollute the results because these, obviously, high risk patients are told to maintain a low sodium diet.

This study was performed using the same international cohort as the previous trial, The PURE study. This study enrolled 101,945 patients and analyzed early-morning fasting urine samples. They used the same Kawasaki formula that over estimated sodium excretion as in the other PURE study.

They used multiple models to analyze the data.

Patients with pre-existing cardiovascular disease, cancer or events in the first two years of follow-up were excluded from the analysis. They also did an additional analysis using propensity scoring to further reduce imbalanced confounders.

The most important letter in the PURE acronym is P for prospective. In this case it allowed them to match the cross sectional sodium excretion data with long-term follow data. Mean follow-up was 3.7 years. The primary outcome was death or a major cardiovascular event. Over the period covered by the study they recorded 3,317 outcomes. The risk from changes of sodium intake was seen at the edges of intake:

The U-Shaped curve seen with sodium was not seen with potassium. The more potassium excretion the lower the risk of the primary outcome. 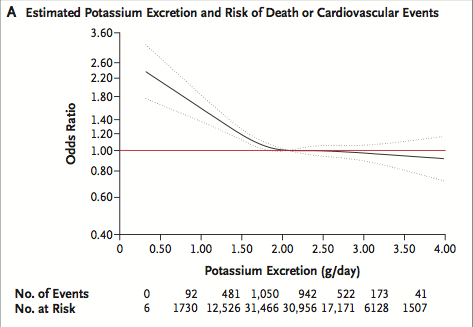 The results were essentially the same in the propensity-score-matched analysis.

I found this paragraph from the discussion to be particularly salient:

Current guidelines, which recommend a maximum sodium intake of 1.5 to 2.4 g per day, are based on evidence from largely short-term clinical trials showing that reducing sodium intake from a moderate to a low level results in modest reductions in blood pressure. The projected benefits of low sodium intake with respect to cardiovascular disease are derived from models of data from these blood-pressure trials that assume a linear relationship between sodium intake and blood pressure and between blood pressure and cardiovascular events. Implicit in these guidelines is the assumption that there is no unsafe lower limit of sodium intake. However, sodium is known to play a critical role in normal human physiology, and activation of the renin–angiotensin–aldosterone system occurs when sodium intake falls below approximately 3.0 g per day.

The authors make it clear that an epidemiologic association between mortality and sodium excretion is not the same as finding increased mortality or lack of benefit from patients lowering their sodium intake. Advice that the authors of the third study should have taken the time to internalize.


Finally, our study provides an epidemiologic comparison of groups that consume different levels of sodium, and it does not provide information on the effect on clinical outcomes of reducing sodium intake. Therefore, our findings should not be interpreted as evidence that the intentional reduction of sodium intake would alter the risk of death or cardiovascular disease.