I had never heard of this:


Corticotropin shares the same profile of indica- tions as systemic glucocorticoids: polyarticular flares in which NSAIDs are not effective or contraindicated. However, corticotropin is more costly compared with generic glucocorticoids and not as widely available. Its mechanism of action seems to be through stimulation of endog- enous adrenal hormones (63, PDF); however, direct anti- inflammatory effects at the affected site also have been postulated (64). Corticotropin is available for subcutaneous or intramuscular adminis- tration, and a single dose of 40 IU is rapid, efficient, and well tolerated, even in patients using moderate doses of oral glucocorticoids (65, 66, 67) Adverse effects include mild hypokalemia, fluid retention, hyperglycemia, and the development of rebound arthritis; the latter is controlled by administration of prophylactic low-dose colchicine (if possible).

Anybody doing this?
Posted by Unknown

Patient with a lifelong history of hypokalemia. He came to me for a second opinion, his previous nephrologist had been nudging up his potassium dose on every visit and the patient was now on 70 mEq of KCl daily and was getting uncomfortable with endlessly increasing doses of potassium.

At the time I saw him these were his labs (he had decreased his potassium supplementation to 20 mEq/day):

Trans-tubular potassium gradient: 14.9. That's crazy high for a patient with hypokalemia, one should expect it to be less than 2 for hypokalemia of extra-renal origin, and only 7 or 8 for hypokalemia from hyperaldosteronism. Halperin et al. were not able to get the TTKG that high even when they took normokalemic patients and doped them with fludrocortisone and 50 mEq of oral potassium.
And that 14.9 is assuming the urine potassium is 100, our lab doesn't do serial dilutions so who knows what the actual potassium is? 120? 140?
I'm still waiting for the renin and aldo but I smell some Bartter's
Posted by Unknown

Today I did a noon conference on sodium for the neph fellows. Instead of a comprehensive sodium lecture I focused on a number of different elements and interesting aspects of hyponatremia. Mostly a deeper dive into aspects that you don't have time to cover in standard sodium lecture.

I opened with 17 quick slides on free water clearance. These slides are old and I think I could do better. Definitely due for an update.

Then I used a slide deck which covers:


It was a fun lecture and everyone participated in a casual and interactive freewheeling learning session. Great stuff.
Posted by Unknown

It's summer, make sure to warn all of your SIADH patients about sun sensitivity

This came into my office on Friday.

Demeclocycline is minimally effective for SIADH and has a bad side-effect profile to boot. This patient has heart failure in addition to idiopathic SIADH. So salt tablets are poorly tolerated, and he needs chronic loop diuretics to stay out of the hospital. This makes managing his water metabolism pretty tricky. The only reason I use demeclocycline as opposed to the highly-effective and safer tolvaptan is cost. Tolvaptan is $300/day wholesale, and not one of my patients has been able to get it covered by insurance.
Way to price that drug Otsuka, such that even well insured patients can't use it. I'll never understand drug pricing.
Posted by Unknown

When did UpToDate add links to PubMed? 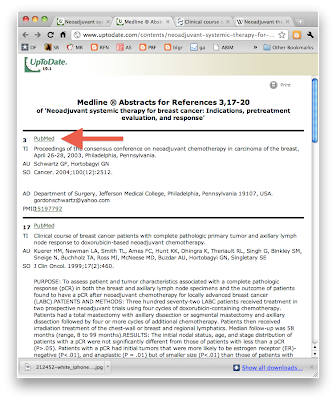 One of my friends had a heart attack

Pretty stunning. He's young and, despite some tobacco and a generous BMI, he seems healthy. He eats whole foods and is physically active. He does not have diabetes or hypertension.

Last night he was asking about whether a stress test could have made a difference. Two years prior, he experienced symptoms consistent with atypical angina. He had two episodes of chest pain, both associated with activity, but not regularly reproducible. My friend discussed these symptoms with a doctor who did an initial work-up to get a Framingham risk score but my friend never followed up. So the question my friend had was simply, "Should an exercise-stress test have been done on my initial presentation?"

So let's look at the data. During the hospitalization a lipid panel was done which allows us to calculate his Framingham Risk: 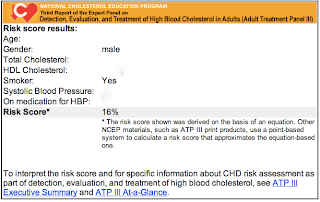 Fifteen percent, intermediate risk. Last year the NEJM published a great article (at least by my pee-stained eyes) that looked at the diagnostic yield of cardiac catheterization and non-invasive testing. The data is not very encouraging. Here are the key figures, at least for my question: 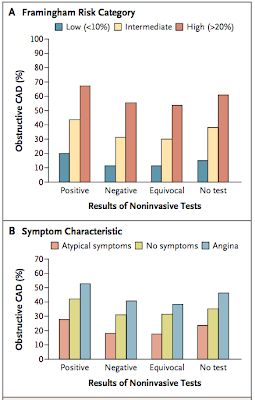 The top panel looks at the diagnostic yield of noninvasive heart tests, and stratifies patients based Framingham risk scores. What should be obvious is that the there is much greater differentiation of outcome within series (same stress test result but varying Framingham scores) than compared to fixed risk scores and varying non-invasive test results (i.e. the red arrow is more important than the bue one): 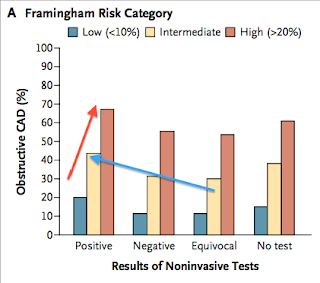 That means that, had my friend gone for a stress test, the likelihood of having a positive cath would have gone from 35% with a negative test to 42% with a positive stress test. It's hard to imagine that a rational medical plan would change with that additional data. Stated another way, would any doctor recommend a cardiac cath with a pretest probability of 42% but not order that same test with a pre-test probability of 35%? Doubtful.
The other thing which is notable, in panel B is that atypical angina is protective compared to no symptoms at all. My friends symptoms were definitely atypical. Here are the definitions according to UpToDate:
So it looks like my friend's primary care doctor was using evidence based medicine. He did not rush to a stress test or other noninvasive test because the Framingham Risk Score was a better predictor of cardiac disease and my friend's description of the chest pain, oddly, put him at a lower risk of coronary disease than no symptoms at all.
Posted by Unknown

Derek K. Miller died on May 3rd. He was  prolific blogger and here is the beginning of his last post:

Here it is. I'm dead, and this is my last post to my blog. In advance, I asked that once my body finally shut down from the punishments of my cancer, then my family and friends publish this prepared message I wrote—the first part of the process of turning this from an active website to an archive.

His blog is 10 years old. That's got to be one of the oldest around.

I guess we should get used to this, a new type of writing, the chronicling, in near-real time, our last moments.

Salon has some perspective.
Posted by Unknown