I spoke on the openning day in one of the big rooms. This was my first talk at a national meeting (though I did do an oral presentation to a small room for the American Society of Hypertension but the room held only about 50 people. This felt like a thousand.

Here is the room before it began to fill:

and here is the talk. To see the real presentation, download and view the powerpoint. Slideshare squashes the animations so the slides don't build right.

Imaging in Acute Kidney Injury, how not to harm patients

Renal week day 4: The case for DDAVP in severe hyponatremia

Today I went to see Richard Stern talk about Therapeutic Considerations in the Hyponatremic Patient. It was an excellent talk. One of the concepts he introduced, at least to me, was the use of DDAVP in the patient with severe hyponatremia.

His argument was that the biggest threat to to these patients is the overly rapid correction of sodium due to the sudden suppression of endogenous ADH in the middle of therapy. This is exactly what I was worried about when I was treating that severe case of hyponatremia a couple of weeks ago. My solution up to now is to write an order for the nurse to call me if the patient's urine output rises over 100 mL an hour. Unfortunately this is an unusual call order and nurse compliance with it is questionable.

He proposes using DDAVP to essentially lock, or hold constant urinary losses. Then you use 3% saline and the increases in plasma sodium should be more predictable.

This maneuver has a high degree of difficulty but I think it solves an important problem. I'm going to try this on my next case of extreme hyponatremia.

Has anyone else used this technique?

- Posted using BlogPress from my iPad
Posted by Unknown

What is there to say?
Posted by Unknown

Email ThisBlogThis!Share to TwitterShare to FacebookShare to Pinterest
Labels: humor

If you are going to ASN Renal Week, let's meet up

It would be fun to put a face on people interested in medical blogging. I am in Denver right now but I'm too stressed about my talk to meet until after noon on Thursday. If anyone is interested leave a comment, and I'll come up with a location for a casual meeting.
Posted by Unknown

Lowest sodium I have ever seen

I'm not sure if it is really the lowest sodium but it definately was among the lowest.

I received a call regarding a consult for a patient with a sodium of 105.

The patient is a 60 year old caucasian woman who had been started on chlorthalidone 3 days prior to admission. Her physician had been wrestling with hypertension and changed her from 25 mg of hydrochorothiazide to 50 mg of chlorthalidone. (The internist was keeping up with her American Journal of Hypertension. Though 50 mg is a whole lotta chlorthalidone.) 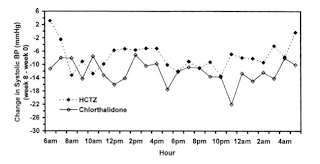 After one or two days of the new diuretic the patient started vomiting and developed diarrhea. The only thing she was able to keep down was water. When she came to the ER she hadn't eaten anything solid for two days.
She was admitted with hypovolemic hyponatremia. She was given a bolus of 500 mL of normal saline in the ER and the sodium went up to 108. Additionally her potassium was 2.7 and her magnesium and phosphorous were low. She was started on potassium chloride and sodium phosphate prior to being transferred to the ICU. When I called the nurse I was told the intensivist  planned on starting her on 3% saline.
I was immediately worried about overcorrecting her sodium and developing osmotic demyelination syndrome from 3% saline and aggressive correction of her potassium. Tom Berl had come and spoken to our fellow and had put the fear of potassium in me by discussing a case that was triggered by potassium repletion. From the case report:

This patient was at risk of overcorrection because she had two of the most common clinical settings in which such overcorrection occurs: thiazide use and hypovolemia.

Patients with hypovolemic hyponatremia send conflicting signals to the hypothalamus regarding ADH release. The volume deficiency stimulates ADH (if the body volume deficient, let's not lose any water via the kidneys) and low osmolality surpresses ADH (the body is too diluted so let's lose some water to bring the concentration up). In the case of this conflict, volume rules. As I tell my medical students,


Remember the ABC's, Airway, breathing and circulation. O for osmoregulation is way down in the alphabet.

The problem of rapid correction occurs when you correct the volume deficiency and all of the sudden the hypothalamus asks itself, why am I releasing any ADH with an osmolality of 260? 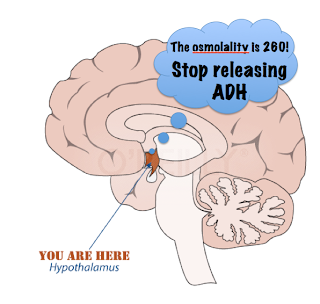 Then the kidney starts producing urine that you could probably bottle and sell as organically filtered water. Electrolyte free water clearance begins to approach the urine output and the sodium also starts to climb and climb fast.

To protect this patient I told the nurse to decrease the normal saline to 100 mL per hour and to call me if the urine output goes over 200 per hour. We also started checking the sodium every six hours and I ordered urine osmolality, sodium and potassium.

Her sodium started to rise slowly, the urine output increased but never resembled Niagra. After two days her sodium was in the 120s her urine still appeared volume depleted and volume status began to look wet. She developed wheezes and she had a few rales. We had to abandon the normal saline. We started tolvaptan. She received 30 mg once and then 15 mg the next day after she had a brisk response. After that her urine electrolytes resembled SIADH.

Once the sodium crossed 130 I stopped the tolvaptan, restricted her free water, and added a gram of sodium chloride twice a day. Her sodium stabilized around 130.

Around this time I sent a renin aldo ratio. I usually order these before I start a patient on aldactone, because after you start it you need to wash them out for weeks prior to checking for primary hyperaldosteronism. Our patient had difficult to treat hypertension and hypokalemia on admission, so I checked it. I just found out that it came back positive. The high aldosterone was after we had corrected her volume deficiency. I think it is primary, and this may explain why she had persistently low urine sodiums despite successful volume resuscitation.

We looked for a cause of the SIADH, but couldn't find anything. No narcotics, no pulmonary disease, no malignancy, normal TSH and cortisol, no anti-depressants. She had a normal non-contrast head CT scan on admission. I even ordered a contrasted CT scan of the chest to make sure she didn't have a cancer in there. Nothing. Idiopathic SIADH hiding behind, at least initially, volume depletion and in the background of primary hyperaldosteronism. Strange case.
Posted by Unknown

I have a 35 year old patient who recently received his second kidney transplant. He received his first transplant in his 20s in Albania after going into renal failure due to SSG (that's Some Sort of Glomerulonephritis, a typical diagnosis for a patient who emigrates to the US with a failing transplant and little medical history).

I increased the enalepril to 10 mg and it fell to 16.2 and continued to fall until it is now around 14.
Posted by Unknown