Last Thanksgiving weekend, many bloggers participated in the first documented “blog rally” to promote Engage With Grace – a movement aimed at having all of us understand and communicate our end-of-life wishes.

It was a great success, with over 100 bloggers in the healthcare space and beyond participating and spreading the word. Plus, it was timed to coincide with a weekend when most of us are with the very people with whom we should be having these tough conversations – our closest friends and family.

The original mission – to get more and more people talking about their end of life wishes – hasn’t changed. But it’s been quite a year – so we thought this holiday, we’d try something different.

A bit of levity.

At the heart of Engage With Grace are five questions designed to get the conversation started. We’ve included them at the end of this post. They’re not easy questions, but they are important.

To help ease us into these tough questions, and in the spirit of the season, we thought we’d start with five parallel questions that ARE pretty easy to answer:

Silly? Maybe. But it underscores how having a template like this – just five questions in plain, simple language – can deflate some of the complexity, formality and even misnomers that have sometimes surrounded the end-of-life discussion.

So with that, we’ve included the five questions from Engage With Grace below. Think about them, document them, share them.

Over the past year there’s been a lot of discussion around end of life. And we’ve been fortunate to hear a lot of the more uplifting stories, as folks have used these five questions to initiate the conversation.

One man shared how surprised he was to learn that his wife’s preferences were not what he expected. Befitting this holiday, The One Slide now stands sentry on their fridge.

Wishing you and yours a holiday that’s fulfilling in all the right ways.

To learn more please go to www.engagewithgrace.org. This post was written by Alexandra Drane and the Engage With Grace team. If you want to reproduce this post on your blog (or anywhere) you can download a ready-made html version here
Posted by Unknown

Turns out that seemingly sound advice will kill'ya.

Headlines from this week: 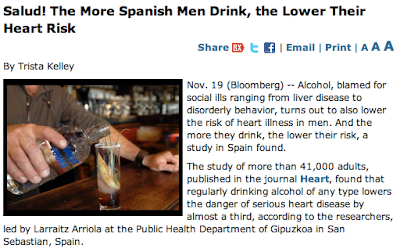 Any drinking lowered the risk of heart disease but the more patients drank the greater the protection. And the amount they drank was pretty staggering:


The health benefits of alcohol were touched upon in ths prior post.

Not only did the patients randomized to folic acid + B12 have a higher rate of developing cancer, they had a higher cancer mortality. Most of the cancer mortality came from excess lung cancer in the folic acid + B12 group. This was despite the fact that there were more smokers in the placebo group (38% vs 40% p=0.01). (JAMA)
The fall of folic acid was touched on in this prior post.
So parents, remind your kids to drink their beer and forget their vitamins.
Posted by Unknown

The article is here.

Three of our attendings and fellows raved about Dr. Tolwani's AKI in the ICU lecture from Renal Week.

Here is the slide deck.
Posted by Unknown

Membranous nephropathy is a common finding when patients are biopsied for nephrotic syndrome. Fortunately, it is a relatively benign disease with a significant number of spontaneous remissions. (Schieppati, NEJM 1993)

Adequate renal function was defined as "no ESRD"

Since there are so many spontaneous remissions and the therapy has significant side-effects we risk stratify patients in order to spare low-risk patients from treatment.

Though the instinct after getting a kidney biopsy is to start therapy immediately, in patients with a normal creatinine, waiting for 6 months and monitoring the creatinine and proteinuria does not alter the patients response to treatment. (Medline)

The biopsy findings have long been held of major importance on predicting prognosis but an analysis of 389 biopsies questioned whether histology provided information that independently predicted prognosis. (Medline)

Two urinary findings are gaining acceptance at being able to better predict the clinical course of disease. Beta-2 microglobulin excretion greater than 0.5 mcg/min and IgG excretion over 250 mg per day (others use the more sesitive value of 125 mg/24 hours) have both been associated with increased risk of renal progression. (Medline) 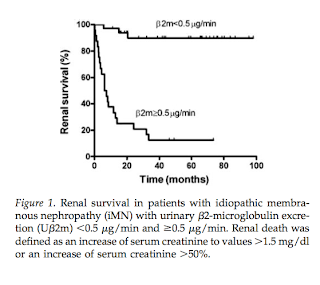 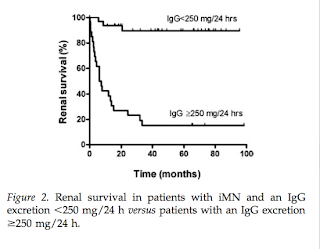 Treatment recomendations are based on the probability of progression.

Low Risk
For patients with a low risk of progressing the recommendation is to stay and pray.

These patient should be initiaed on the Ponticelli or modified Ponticelli protocol. This calls for three consecutive two-month cycles of cytotoxic therapy.

For patients with resistant disease there is no consensus on what is best and a list of what's been tried looks like a line up of the usual suspects, nephrology edition. 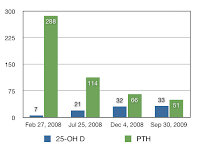 I just saw a patient with modest stage 3 CKD. When I first saw her she had a 25-OH D of 7 and a PTH of 288. I started her on 50,000 units of ergocalciferol a week. It took 12 months but we finally corrected her vitamin D deficiency and her secondary hyperparathyroidism just melted away.
Posted by Unknown

The results of the ARBITER 6-HALTS study were published by the NEJM yesterday and they are not good. Great commentary over at KevinMD.
Posted by Unknown

UpToDate can be so entertaining, I mean deceptive

I am working on a review of membranous nephropathy and I found this quotation from UpToDate:


A random urine protein-to-creatinine ratio should NOT be used for initial risk stratification, since the relationship between the ratio and 24-hour protein excretion varies widely among patients (show figure 2).

This surprised me. I use the protein-to-creatinine ratio all the time and, though I have found some individuals where it is wildly inaccurate, I had been unaware of any data that showed that to be the case.

I eagerly clicked the link to the figure and this is what I found: 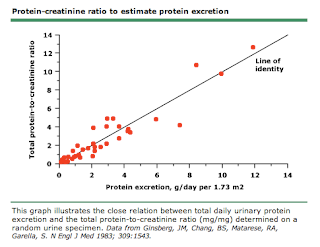 That looks highly accurate to me. Every data point clusters right along the line of identity. I pulled the abstract (alas, no full text from NEJM 1983) and found this conclusions from the authors:


In a study of 46 specimens we found an excellent correlation between the protein content of a 24-hour urine collection and the protein/creatinine ratio in a single urine sample.

I love UpToDate but this is really disappointing. Making a claim and referencing it with data which disproves the claim is disingenuous.

UpToDate, you need to do better.
Posted by Unknown

How do you go from an EGD to acute kidney injury?

We had an interesting consult a few weeks ago. 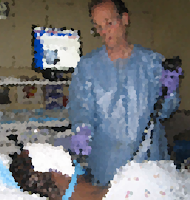 The patient was an elderly gentleman who recently underwent an EGD for gastritis-like symptoms. A few days after the procedure he received a call from his gastroenterologist telling him that he had H. Pylori and needed to start an antibiotic. He was prescribed PrevPac for 10 days. He almost immediately began to feel worse. His wife ultimately stopped giving him the PrevPack after about four days of increasing weakness, lethergy and nausea. Despite stopping the new medicine the patient continued to deteriorate. He was admitted about 2 weeks after the EGD.

His creatinine had risen from a baseline of 1.2 mg/dL to 4.5 mg/dL. Our initial thought was that he was pre-renal. We prescribed 0.9% saline but the patient didn't respond, and his creatine continued to rise.


This patient didn't respond to fluids so we reevaluated the history. PrevPac, what's in that? 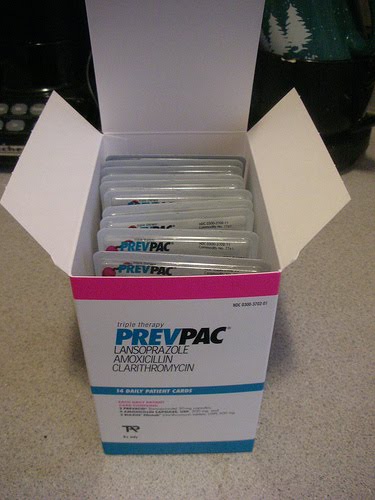 Clarithromycin is a potent inhibitor of CYP3A4 so it interacts with a lot of medications. Our patient was on simvastatin. Let's check out what does Dr. Google has to say about that: 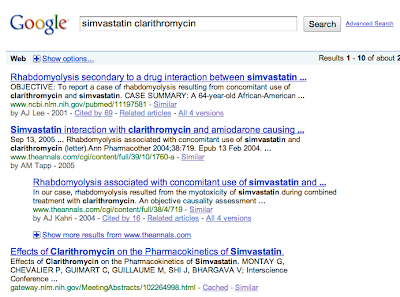 We check his CPK and its 8,000 almost a week after he stopped taking the Clarithro.

Rhabdo induced acute kidney injury due to a drug interaction.


Rhabdomyolysis secondary to a drug interaction between simvastatin and clarithromycin. Clarithromycin is a potent inhibitor of CYP3A4, the major enzyme responsible for simvastatin metabolism.


If the figures on pharmacokinetics from that last article are to be believed then 500 mg of clarithromycin magnifies 80 mg of daily simvastatin to an equivalent daily dose of 640 to 1,120 mg.

Rhabdomyolysis induces acute kidney injury from myoglobin. Myoglobin can precipitate in the presence of acidic urine. The heme component of myoglobin can generate free-radicals which can damage lipid membranes. Patients develop vasoconstriction in response to rhabdomyolysis, both from the direct effect of the myoglobin on the renal vasculature and due to the movement of intravascular fluid into the damaged muscles. This gives a pre-renal picture on the fractional excretion of sodium.

Evaluating volume status can be tricky because patients will often have peripheral edema from the inflammation associated with the rhabdomyolysis. Additionally the BUN:Cr will often be low as the creatinine tends to rise quicker in rhabdomyolysis than in other forms of renal failure. This is usually explained by the release of intramuscular creatinine rather than just a failure to clear creatinine. The younger age and increased frequency of men suffering from rhabdomyolysis may also play a role in this observation.

The electrolyte abnormalities of rhabdomyolysis:


The NEJM recently did a nice review of rhabdomyolysis which presents the recent inconclusive data on alkalinization (not proven to be helpful but the animal/disease models make it look like the right thing to do), mannitol and diuretics and use of high flux dialyzers.

The Annals of Internal Medicine recently published a review of Statin-Related Myopathy. Here is what they had to say about drug interactions:


Because simvastatin, lovastatin, and atorvastatin are primarily metabolized through the cytochrome P450 3A4 (CYP3A4) isoenzyme (43), inhibitors of CYP3A4 could theoretically increase serum statin levels and exposure to susceptible tissues. Drugs known to interact with statins include protease inhibitors, cyclosporine, amiodarone, and fibrates (44, 45). Protease inhibitors are potent CYP3A4 inhibitors and thus can increase up to 30 times the plasma concentrations of certain statins (45, 46). Consequently, both simvastatin and lovastatin should be avoided in pa- tients receiving protease inhibitors (42, 45, 47). Cyclosporine is a potent inhibitor of not only CYP3A4 but also several membrane transporters, and it increases the phar- macokinetic area under the curve of statins by 2- to 25- fold, with many reported cases of rhabdomyolysis (44). Statin dosages in patients receiving cyclosporine have therefore been limited to 5 mg/d for rosuvastatin, 10 mg/d for simvastatin and atorvastatin, and 20 mg/d for lovastatin (42, 47–49).