He is a 57 year old man. Husband. Father. A bit over weight, nothing too extreme. He likes to play basketball. He drinks bourbon, an occasional scotch; he rarely over indulges. The more I learn about him, the more familiar he is. He looks like any one of my friends. He only found his way to my office after his family practice doctor got frustrated trying to control his blood pressure. Maybe it's sleep apnea or too much salt in the diet. Sometimes I find a rare salt-retaining hormone abnormality.

On the first visit I did a routine urinalysis. It showed a hint of protein. When he came back, delighted with his improved blood pressures, I delved a little deeper and discovered the hint of protein was a lot more significant, with a strange ratio of albumin to protein. This is the pattern we see in myeloma. All of a sudden, the hemoglobin that looked like routine anemia yesterday is now the car crash I can't turn away from. The arthritis he mentioned transforms in my mind into myeloma bone pain.

I tell him what I'm thinking and the casual, good natured clinical encounters become heavier. I order the myeloma tests I learned about in medical school, the PEP brothers, SPEP and UPEP. I add on the plasma free light chains that the myeloma specialists perseverate on.

A few days later I see the electronics flag indicating unviewed lab results.
Like Schrödinger's cat in the box, at that moment he has myeloma and doesn't have myeloma.

Time for the ambiguity to end. Time to open up the box and look inside...


This bit of medical fiction was me trying to express why I'm raising money for multiple myeloma.

I am raising money for the Multiple Myeloma Foundation as part of their Moving Mountains for Myeloma program. The peak of this endeavor will be a trip to Mount Everest Basecamp. My role is to bring awareness of myeloma, I hope this helps give an impression of one small aspect of this devastating but increasingly treatable disease. Help myeloma research.


Please donate in my name to the Myeloma Research Foundation.
Posted by Unknown

I got mentioned on Back to Work, kind of.

In between rounds of getting crushed by my son in Mario Cart 8, I came across this tweet...

Merlin Mann, if you are not aware, is a staple of podcasts and inventor of In Box Zero. In June sixth's Back to Work, Merlin recounts coming across my twitter bio and how it stuck with him as something interesting. I love how he can't come up with my Twitter handle or the exact quote, but he did get the word Nephrologist and totally understood the meaning of the bio, and he got why I think it is important.

This is not an original thought but me just reprocessing Homer Smith's masterpiece for Generation Twitter:


The lungs serve to maintain the composition of the extra-cellular fluid with respect to oxygen and carbon dioxide, and with this their duty ends. The responsibility for maintaining the composition of this fluid in respect to other constituents devolves on the kidneys. It is no exaggeration to say that the composition of the body fluids is determined not by what the mouth takes in but what the kidneys keep: they are the master chemists of our internal environment. Which, so to speak, they manufacture in reverse by working it over some fifteen times a day. When among other duties, they excrete the ashes of our body fires, or remove from the blood the infinite variety of foreign substances that are constantly being absorbed from our indiscriminate gastrointestinal tracts, these excretory operations are incidental to the major task of keeping our internal environments in the ideal, balanced state.

Merlin is a skateboarder and the right age to have probably placed a few Andre the Giant has a Posse stickers. He may appreciate my homage: 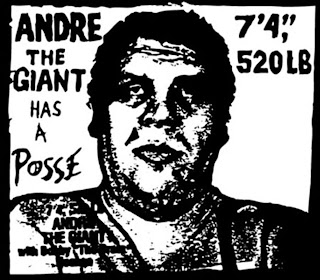 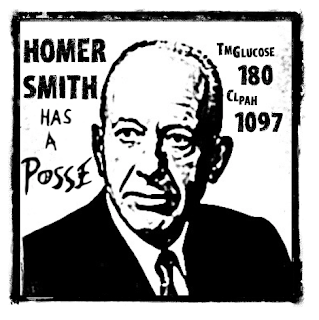 Merlin's voice has been flowing into my ears since I used iTunes to download podcasts to hard drive  based iPods (2004?). He has given me hundreds of interesting ideas that have poked at my cerebral cortex for weeks. I am delighted that I have been able to do the same for him, even if it was just once.
Posted by Unknown 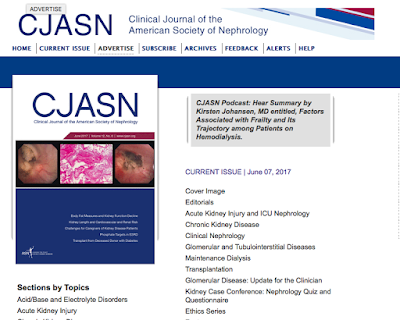 Don't miss this month's discussion of frailty by Dr. Johansen.

Listen to our @kljohansenmd in a @CJASN podcast discuss her work on frailty among #ESRD patients https://t.co/msuiGHHIC9
— UCSF Nephrology (@UCSFNephrology) June 7, 2017

It is actually less of a discussion and more of a essay read out loud. I don't think the format is great for a podcast, but it is really well executed with solid writing and great sound quality.

If you go to iTunes to subscribe to the CJASN podcast, you will be stymied: 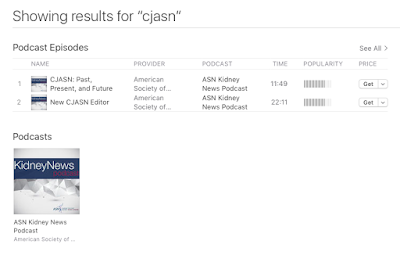 You can find to ASN podcasts where they discuss the journal CJASN but not the CJASN podcast. Not sure why CJASN hasn't submitted the podcast to iTunes, but there is an XML feed for the podcast. Paste this into your favorite podcast app to subscribe to CJASN:

No more dragons left to slay

For years one of the fronts that social media advocates battled was the freedom to tweet at meetings. A number of meetings (we are looking at you ATC) were less than welcoming. I suspect many conferences were used to selling access to the meeting to people who did not participate through video tape, audio recordings or other means and they saw the social media coverage as unnecessary competition.

Why let bloggers and social media gadfly provide for free what we can sell.

Conferences are also typically run by people not on social media and who are unfamiliar with the norms of those communities. Organizers paraded excuses of academic purity and protecting authors. The issues are well documented here.

This all bubbled over last week at the American Diabetes Association national meeting in San Diego (#2017ADA). The organizers tried to enforce a no pictures policy: 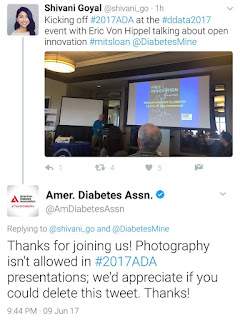 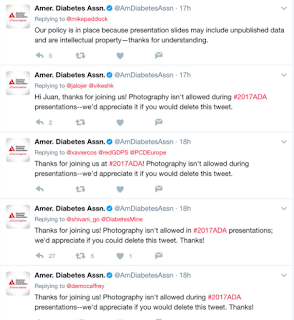 I think Swapnil hit the crux of the issue with this Tweet:

Hey ADA, why even have a hashtag and twitter presence for #2017ADA ? Information wants to be free. Welcome thanks the modern age!
— Swapnil Hiremath, MD (@hswapnil) June 9, 2017

If a conference is going to wade into the world of Twitter and encourage people to participate and spread the knowledge and experience of the conference they must play by the rules of the social media platform they are using. MedTwitter is firmly in the camp of information wants to be free. Encouraging people to tweet while at the same time abandoning one of their core tenets is going to fail every time.

In the end the ADA was made to look like fools (for the second time in two years, check out this story from 2016, and note that the embargo was designed to keep the information secret for 30 minutes before the article was published). And towards the end of the week the ADA appeared to be backtracking:

Linda Cann, the association's senior vice president, was quoted by Liz Neporent, " The association will be reevaluating the policy after the meeting is over"

I've been chair of the sci sessions oversight comm- its the docs who decide policy - till now presenters wanted protection. It will change
— Lou Philipson (@lphilipson) June 11, 2017

I think this marks the end of photo bans at conferences. The ADA tweet stream was such a mess and the photo ban distracted from any scientific messaging the conference wanted to convey that no conference will again try to enforce a similar ban. You may still see signs and slides urging people not to tweet but you can say good bye to aggressive take down notices and heavies hired to patrol the conference rooms.

Matt Sparks and I have been working on ASN for a couple of years and with a final push from the ASN Communication Committee, the ASN Council has reversed their (unenforced) photo ban. This will be the rule going forward. The good guys won this one.
Posted by Unknown

My practice has a number of nurse practitioners and physician assistants. The partners do quarterly teaching sessions for them. It is some of my favorite teaching. They come to each session with a lot of experience and the sessions are more like guided conversations rather than traditional lectures. I usually try to frame the session with a clinical practice guideline and we just go through it step by step. This time I did autosomal dominant polycystic kidney disease. I couldn't find a clinical practice guideline, so I just went with the KDIGO Controversies paper and went from there.

You mentioned in your post there is no CPG in ADPKD. There is a Canadian one recently published:https://t.co/TFBeI0Kw02
— Dr. Jordan Weinstein (@drjjw) June 5, 2017

We use these to make sure we cover all aspects of the disease during the session. They really don't stand alone. They serve primarily as an outline of the conversation.

Look at this chart from KDIGO ADPKD conference. Looks like there are mistakes. pic.twitter.com/IYJE2vWbaU
— Joel Topf, MD FACP (@kidney_boy) June 2, 2017

Specificity should rise with a lack of cysts at higher ages, why is it going own? Thoughts @goKDIGO
— Joel Topf, MD FACP (@kidney_boy) June 2, 2017

The NPs andPAs bought me a cake for winning the Robert Narins Award. So nice. 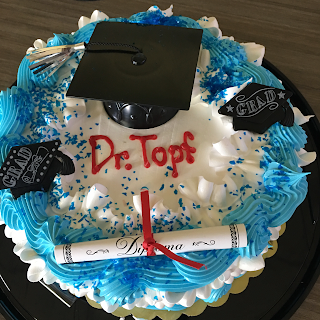