Is this the best review on treating hypertension in pregnancy? Updated

Note: this is a living post that is growing as I brush up on preeclampsia

Update on the Use of Antihypertensive Drugs in Pregnancy

New aspects of pre-eclampsia: lessons for the nephrologist

Also with a free PDF. Thanks NDT.


Although these renal changes in general are believed to resolve completely after delivery, recent evidence suggests that pre-eclampsia may leave a permanent renal damage.

CKD is a risk factor for pre-eclampsia in advanced CKD 3-5, weak evidence

CKD 1-3 is not a risk factor unless the woman also has hypertension, higher quality evidence.


In the first study, women with pre-eclampsia in their first pregnancy had a considerably increased risk of developing kidney disease that needed investigation with a kidney biopsy [Adverse Perinatal Outcome and Later Kidney Biopsy in the Mother in JASN].

women who previously had pre-eclampsia had a four to five times increased risk of later end-stage renal disease, independent of primary renal disease [Preeclampsia and the Risk of End-Stage Renal Disease in NEJM]. Women with recurrent pre-eclamptic preg- nancies and women who gave birth to offspring with low birth weight had an even higher risk. The increased risk remained significant throughout the follow-up period of nearly 40 years. 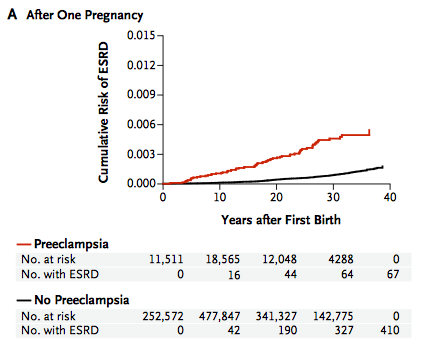 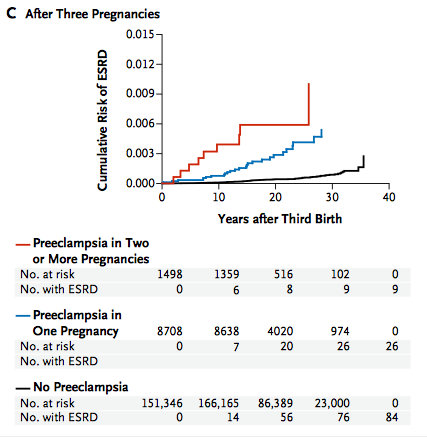 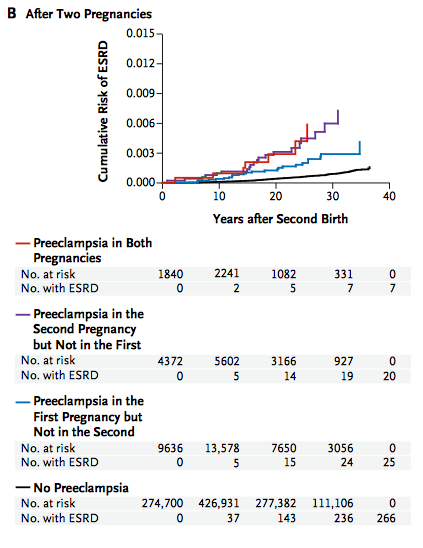 In regards to the natural history of pre-eclampsia:

Warning about these conclusions regarding pre-eclampsia causing CKD: 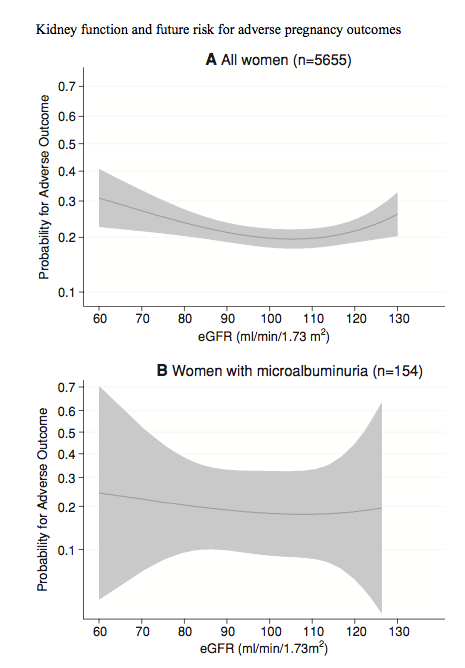 When interpreting the studies of pre-eclampsia and later kidney disease, it should be remembered that pre-eclampsia might unmask asymptomatic or undiagnosed CKD, a disease that might have been present also before pregnancy. A pre-pregnancy eGFR >60 ml/min per 1.73 m2 measured at screening was in a population-based sample associated with future pre-eclampsia risk in hypertensive women [Kidney function and future risk for adverse pregnancy outcomes in NDT] 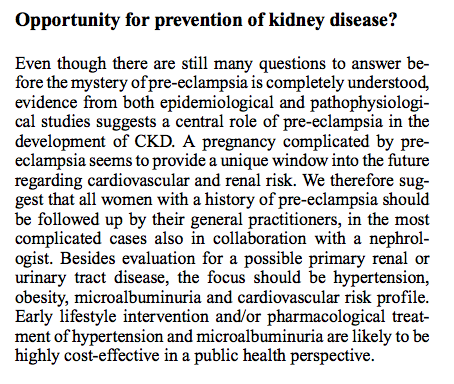 This article by Eiland, Nzerue, and Faulkner in PubMed Central does a nice job reviewing the pathogenesis of the preeclampsia.