Apparently there was a weekly quiz and one of the questions was as follows:

And I received an e-mail asking e to answer this question. Lets go through it item by item. The stem sets up a patient with diarrhea induced metabolic acidosis. This is a cause of non-anion gap metabolic acidosis due to GI loss of bicarbonate.

Choice B. This is right. Ammonia is produced in the proximal tubule in response to metabolic acidosis and hypokalemia. This is why ammonium excretion is able to be up-regulated due to an acid load. Titratable acid is fixed and can't accommodate an increased acid load. The ammonia production varies depending on metabolic need and chronic diarrhea would up-regualte ammonia production so it could be converted to ammonium in the medullary collecting duct to help clear the excess acid load.

Choice C. This is right. Hydrogen secretion is increased in the distal nephron in response to the metabolic acidosis. This is needed to replace the bicarbonate lost in the stool. Every hydrogen in secreted int eh distal nephron synthesizes a new bicarbonate molecule for the body.

Choice E. This is right. Hydrogen secretion in the distal nephron is stoichiometrically equivalent to producing new bicarbonate, one cannot happen without the other.

Some of the social media action around this question:

@kidney_boy If the distal nephron still commences with the TALoH and ends with the papillary collecting duct, B-C-E are all right
— Fra Ian (@caioqualunque) August 24, 2015

One night that I was on call, I received an interesting patient from the ED.

The patient was confused but walked into the ER and was able to give at least a partial history. They did some initial chemistries and called me with the following results: 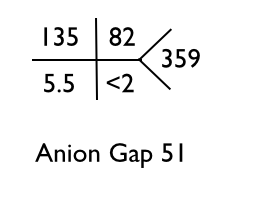 This is the kind of lab that grabs your attention. 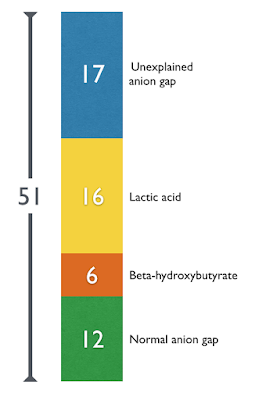 With that glucose the first thought should be, "Is this DKA?"

I try to account for the anion gap. So I look at all the anions I measure and see how well they explain the gap. And if I can't account for the majority of the gap I have difficulty sleeping. This patient's gap was 51, 12 is normal which leaves 39 to account for. Only 6 can be accounted for with beta-hydroxybutyrate.

"Is there a lactic acidosis?"

Next step, look for an osmolar gap.

An osmolar gap of 32 is a profound osmolar gap. We ordered fomepizole and started hemodialysis for presumed toxic alcohol poisoning.

The alcohol screen came back the next day:

Propylene glycol is normally due to the solvents used to dissolve IV drips. So usually we see problems in patients who have been in the ICU for awhile.

Propylene glycol is also found in antifreeze and hydraulic fluids.

The molecular weight is 76, so the 8.1 mg/dl represents only about 1 mmol/L, however it may explain the severe lactic acidosis and by stimulating the production of D-lactate it may explain even more of the gap.
Dialysis removes the parent compound and metabolites. Whether patients need to receive fomepizole is less clear. Kraut and Kurtz suggest fomepizole would be beneficial, while others feel less strongly.


In this N=1 case, our patient did well without receiving fomepizole.

This question came in after class from a couple of students.

If the urine sodium in volume depletion and the great edematous states (heart failure, liver failure, and nephrotic syndrome) is low how can the urine osmolality be high? 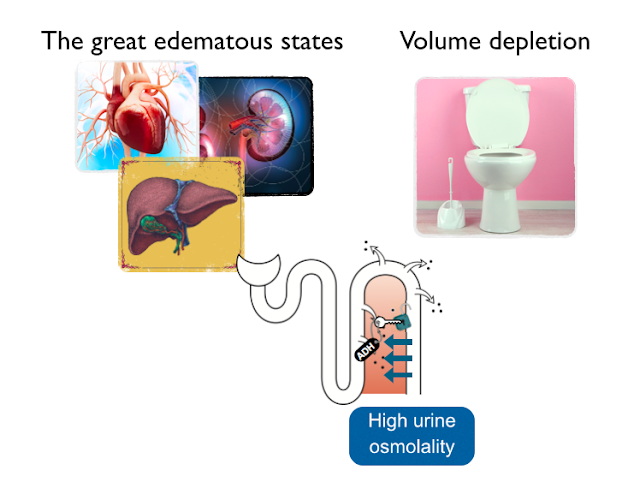 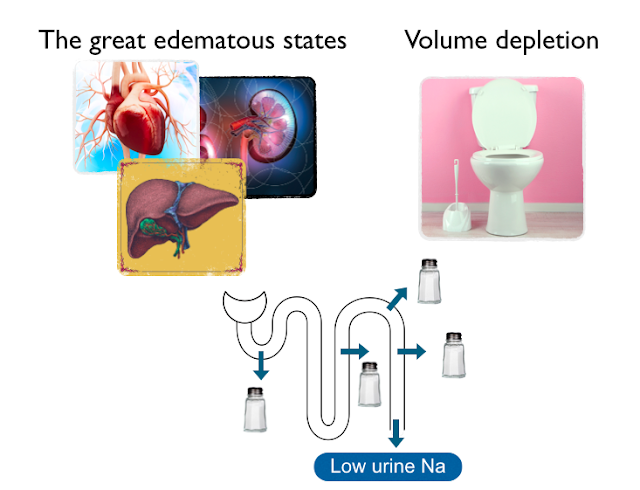 In the advanced electrolyte class (nephrology and critical are fellowship) we look at the electrolyte content of the urine and use it to look at hypo- and hypernatremia more sophistically. For the purpose of medical school, SHELF exams, and USMLE parts 1, 2, 3 you can safely just look at the osmolality of the urine. We are trying to build a model that is understandable and good enough to predict how patients will behave in health and illness. This works pretty good.

The next question also came from a couple of people in class.

One of the reasons that excessive water intake does not cause volume overload is that most of that water (two-thirds) disappears into the intracellular compartment. Just like no one complains of their rings not fitting after drinking a lot of water, having high ADH does not cause interstitial edema.

This image from the lecture needs to be front and center when you think about SIADH: water out of balance, sodium in balance:

The last question for now comes from an e-mail (jtopf@mac.com):

I had a question from the second half of the lecture about treating euvolemic hyponatremia in the case of adrenal insufficiency. I'm having a hard time understanding why urea and salt tablets would help to reverse the hyponatremia. If solute in = solute out and the kidneys are already in sodium balance, how would it increase the solute load in the case of salt tablets? Even if the urine output goes up, won't there still be non-physiological ADH release and concentration of the urine?

So the best way to think about salt and urea tablets is be visualizing this slide from this SIADH lecture: 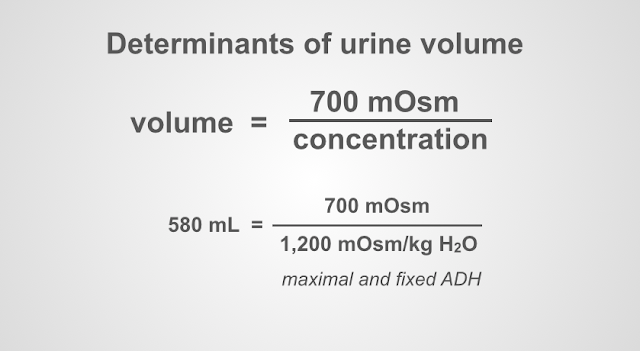 In SIADH, the secretion of ADH is fixed and maximal. It's like somone is stepping on the gas and can't remove his foot.

Normally the ADH slides from minimal to maximal in order to balance water excretion with variable water intake: 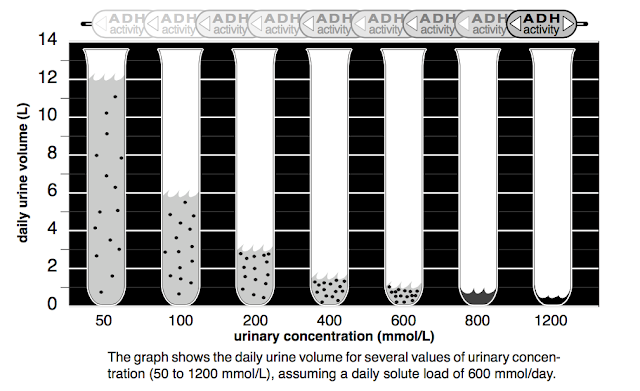 The ADH slider is supposed to indicate that the ADH can slide from minimal activity, resulting in large volumes of urine, to maximal activity, resulting in minimal urine output. As the questioner correctly intuited, the osmolar load is fully excreted. In euvolemic hyponatremia, the slider is jammed to the right. If the urine osmolality (the denominator) is fixed the only way to adjust the urine volume will be to adjust the osmolar load (the numerator). Increasing the osmolar load with a high protein diet or salt tablets or urea pills will raise the numerator and hence increase the urine volume. It's just math. Yes, taking sodium tablets will just result increase the sodium excretion since these patients are in sodium balance, but this additional sodium excretion increases the urine output making it easier for the patient to have less water intake than excretion, the goal for the treatment of hyponatremia.
Posted by Unknown

OUWB School of Medicine materials for 2015

Here is a link to the resources I used last year. They are largely unchanged. The water and solute lecture is available under the lecture tab. I will continue to edit this post with additional materials and links.

PBFluids has been quiet. Took awhile to just clear the cobwebs to get this post up.

One of the things that has kept me busy has been a project with a company called MedMastery. Franz Wiesbauer was a fan of my fluids book and reached out to me. We worked together to create a curriculum covering body water, diuretics, IV Fluids, sodium and potassium. The full course is about 1,000 slides. But the genius of MedMastery is how they edit and craft the course so it is broken up into an odd fifty 6-minute morsels. It is medical school for Generation Keurig.

MedMastery has opened up a few of the K-cups for promotion.

Take a look at two of my diuretic lectures: 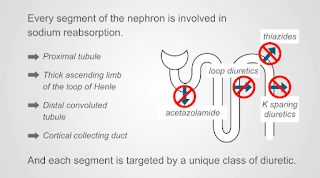 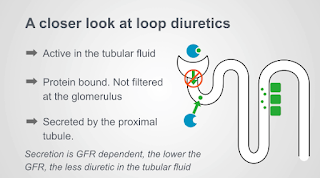 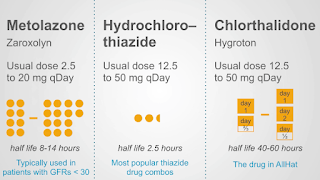 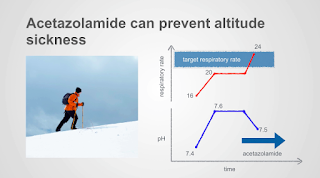 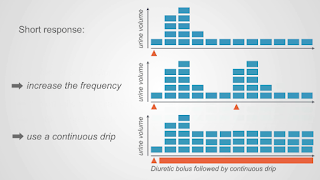 Some photos from the recording studio 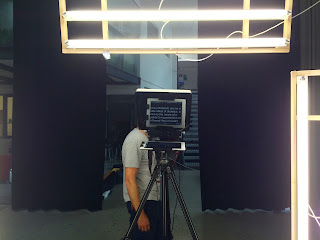 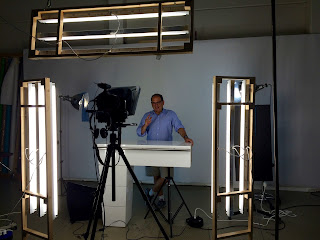