NephJC this week is on AKI from running a marathon

I went through the PBFluids back catalog to find three posts on the dangers of running marathons. Two on hyponatremia and one on coronary calcium. Enjoy. Hope to see you on the Twitter with hashtag #NephJC on May 23, at 9pm EST, and May 24, at 8pm GMT.
Posted by Unknown

I was invited to speak at the Wayne State Alumni Day. It felt pretty special to come back to my old medical school and speak. They put together a great morning of lectures for their CME session.

This is a shorter 30 minute version of the talk.

You can find the full length lecture and additional information at these links:

Link to the 1-hour presentation I gave at the ACP of Michigan.

I had the honor of speaking at the Michigan State Medical Society last night. I gave an update on nephrology.

I am recording screen casts of each section and will post them here.

1. Contrast Nephropathy, Maybe not so Dangerous


Update in Nephrology 2017: Contrast Nephropathy from joel topf on Vimeo.

2. NSAIDs, Maybe not so Dangerous

Update in Nephrology 2017: NSAIDs from joel topf on Vimeo.

I got a lot of push-back from the audience on these first two sections. One participant was was very frustrated with the message and felt it was irresponsible to present the data showing the apparent lack of toxicity from contrast and NSAIDs.

I lived through the great anemia debacle and after that I swore that I would no longer trust the experts. I wouldn't swallow the guidelines whole. If the data didn't back it, neither would I.

Update in Nephroogy 2017: Timing of dialysis in AKI from joel topf on Vimeo.

This was probably too wonky for a general medicine audience. I would take this out if I was going to do the talk again.

Update in Nephrology 2017: PPIs cause CKD from joel topf on Vimeo.


Update in Nephrology: Empagliflozen from joel topf on Vimeo.

6. I don't have a video for the sodium story. It's only a few slides, not worth recording a video.

The Keynote file is available here. 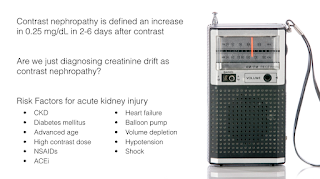 I love NephSAP. It is the greatest life long education product that I use. In my mind, it is the crown jewel of an ASN membership.  Thank-you Bob Narins.

We have embedded it into our fellowship curriculum. When I do the questions I get blown away. They are really hard. I have to go searching hard to answer them. I figure I'd get aroound 50% without access to Dr. Google and the Preview Search box. The only exception is the fluid and electrolyte issues. I can handle those pretty well. This month's NephSAP I nailed with only two misses. One of those misses annoys me. Here is the question: 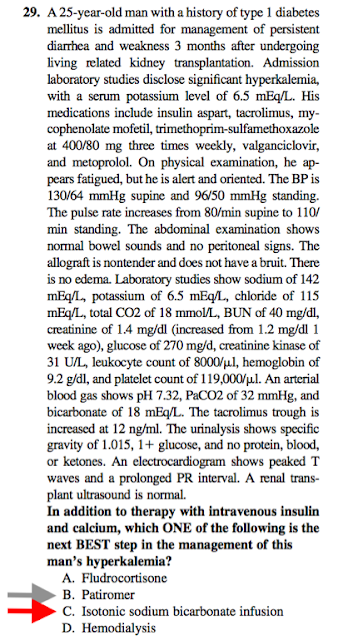 So the TL;DR summary is you have a transplant patient with some graft dysfunction likely due to the concurrent volume depletion. His potassium is elevated and he has some worrying ECG changes (peaked Ts and a prolonged PR interval). Of note, he is on two medications that can provoke hyperkalemia: tacrolimus and trim/sulfa. This month's NephSAP has a great section on why tacrolimus causes hyperkalemia. Tacro causes a drug induced Gordon's syndrome:

Gordon Syndrome (pseudohypoaldosteronism type 2) is a gain-in-function mutation of the thiazide sensitive NaCl co-transporter in the distal convoluted tubule. The increased sodium resorption means there is no/little sodium available for the eNaC in the cortical collecting duct. No sodium resorption means no negative charge in the tubule driving potassium and hydrogen excretion. 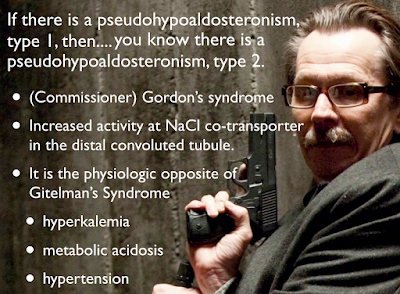 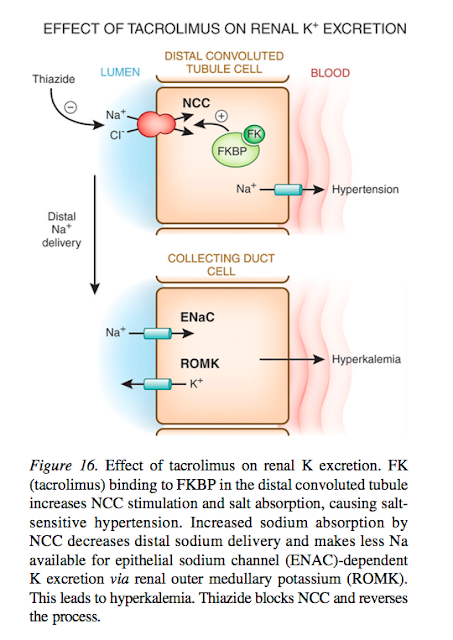 The clinically relevant pearl is that calcineurin inhibitor induced hyperkalemia is particularly sensitive to thiazide diuretics. So I was hunting for some HCTZ or indapamide among the foils.

Then I went looking for some saline to correct this patient's hypovolemic acute kidney dysfunction and increase kaluresis.

So I was left with the unenviable position of picking among choices that I would not actually do in this circumstance.

Fludrocortisone. I am a big fan of fludro in the treatment of hyperkalemia. But in this situation where there is both eNac antagonism by the trim/sulfa and tacro blocking distal sodium delivery, this did not seem like an effective treatment.

Patiromer. No data on patiromir for acute management of hyperkalemia, but not a bad option and this NephSAP did show some data on speed of treatment so I went with this. 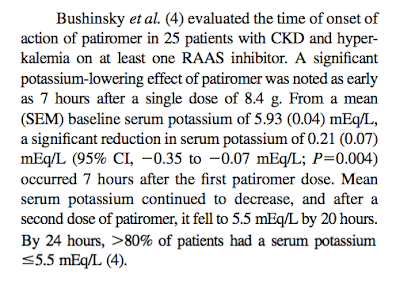 Hemodialysis. This seems a bit extreme for an increase in creatinine from 1.2 to 1.4. But if the patient had a functional hemodialysis access, this is something I could be convinced to do.

But the right answer was our old friend bicarbonate. I thought we killed this one in the 90's. 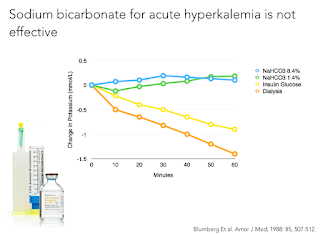 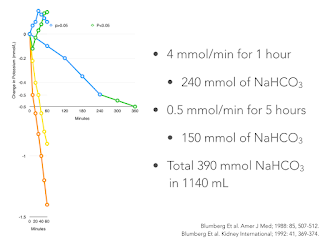 A sodium bicarbonate infusion would not only correct the hypovolemia, but would enhance lumen electronegativity in the cortical collecting, thereby facilitating potassium secretion.

The reference leads you to Sterns recent review in Kidney International. Here is the relevant paragraph in that reference:

Reference 76 sounds intriguing. It is a KI article from 1977. It was an uncontrolled, but still somewhat convincing study. See the full open access manuscript here.

My beef comes from the NephSAP authors taking their eye off the ball. We don't want to lower the potassium, we want to avoid arrhythmia. The consensus in nephrology is that IV calcium is the best way to avoid arrhythmia and the NephSAP authors specifically state that IV calcium is given. My concern is why should we then give a treatment that will counteract the antidote to hyperkalemic cardiotoxicity? Raising the pH decreasea the ionized calcium. Will that precipitate arrhythmia? I don't know. I'm not sure anyone does. Without convincing prospective data I'm sticking with saline.