The patient had SIADH due to viral encephalitis. We started tolvaptan 30 mg and his SIDAH rapidly reversed with the sodium rising from 124 to 128 overnight and up to 136 in the following week. Along with his improved sodium the patients mental status improved. I attribute that more to improvement in the encephalitis than the normalized osmolality but the association is there.

I stopped the Tolvaptan after 8 days and the next morning here are his urine chemistries:

Urine sodium 20, urine osmolality was 614. Somehow, I got a urine chloride rather than the urine potassium I ordered. The sodium nudged up to 137 off the tolvaptan. It looks like the SIADH has resolved with the urine sodium falling from 148 prior to the drug to 70 after the first dose to 20 off the drug completely.
Also note that even though the urine osmolality (614) is greater than serum osmolality, the serum sodium can still rise. This is because the electrolyte free water is still positive, despite a negative solute free water.
- Posted using BlogPress from my iPhone and edited on my 15 inch MacBook with a big dent in the corner.
Posted by Unknown

Altitude sickness and the role of acetazolamide 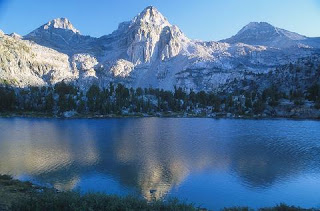 I am going to Kings Canyon National Park at the end of the month. I will leave Detroit, elevation 600 feet and will travel via planes, trains and automobiles to 9,000 feet for the first night. Then we will begin out hike and cross passes over 12,500 feet.

In the past, I have developed modest altitude sickness going from 600 to 8,000 feet. So, I am nervous about the same problem on this trip. Acetazolamide is supposed to ameliorate altitude sickness.

The body acclimates to decreased oxygen and is so effective that people can function at the top of Mt. Everest without supplemental oxygen. The partial pressure of oxygen at the summit is 43 mmHg which is equivalent to breathing 6% FiO2.

The primary means of improving oxygenation is hyperventilation. Hypoxia stimulates ventilation. There is also an increased ventilatory response to carbon dioxide so that that the normal respiratory response to carbon dioxide is exaggerated so that one gets more ventilation at lower CO2 levels. The reason that increased ventilation improves oxygenation has to do with the effect carbon dioxide in the blood has on oxygen transfer in the alveoli. During respiration CO2 leaving the blood dilutes the incoming oxygen at the alveoli, increased respiration, lowers the pCO2 and hence minimizes this dilution.

Antagonizing the hyperventilatory response is respiratory alkalosis. Central chemoreceptors detect alkalosis in the CSF and slow respiration. This is one of the key factors preventing the essential hyperventilation. 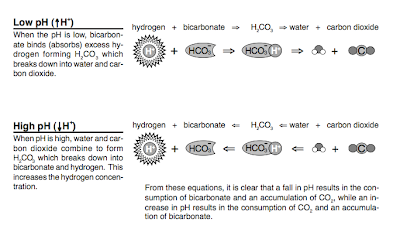 This is the fundamental buffer reaction in the body and it is amazing to me that blocking this essential acid-base reaction is not lethal. Acetazolamide works in the proximal tubule by blocking the reabsorption of filtered bicarbonate. 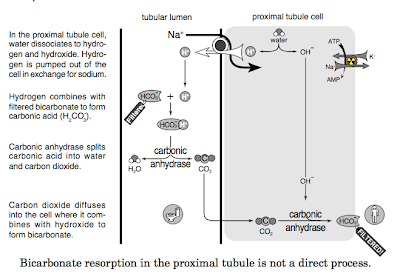 The SIADH is due to West Nile Virus induced encephalitis.

- Posted using BlogPress from my iPhone

Check out that urine sodium. The guys pissing normal saline. That's the highest urine sodium I have ever seen.

Interpretation: with those urine electrolytes, when urinates 2,300 mL it is as if he actually drank nearly a liter and a half of tap water. And that is why fluid restriction fails in dense SIADH.

- Posted using BlogPress from my iPhone