I'm going to Mount Everest Basecamp next year to help raise money and awareness for multiple myeloma. Basecamp is at 18,500 feet. In honor of that altitude, here is a review of all the times I have blogged about acetazolamide.

Please take the hint and make a donation.

It is for multiple myeloma. 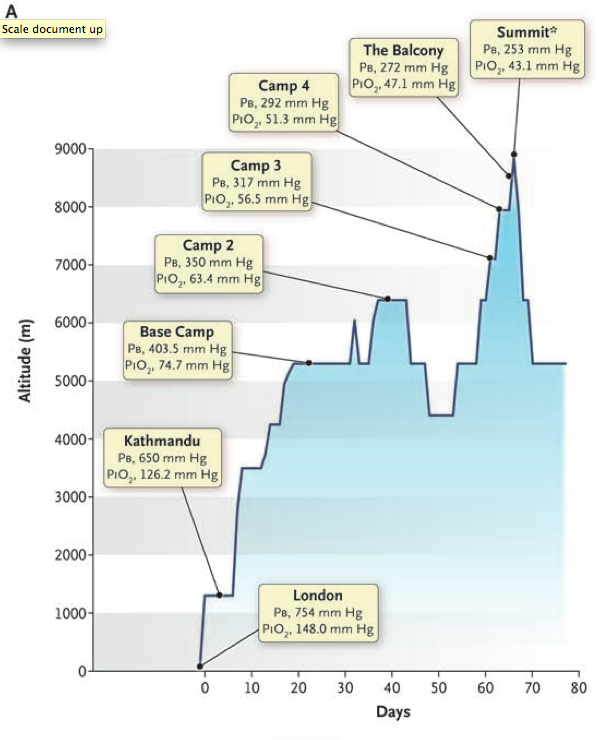 This seems like a pretty innocent infographic. It is trying to communicate how Canada is doing in preventing and managing diabetes. 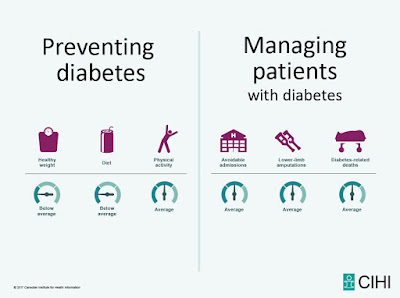 Here is the response I saw in my timeline

This seemed a stretch that this poster was stigmatizing people with diabetes.

This Storify has the entire twitter exchange that follows.

I am gong to highlight a few of the tweets from that exchange here.

One of the first criticisms leveled was that the poster did not distinguish between type 1 and type 2 diabetes. This is important because the advice they were tracking and grading were all techniques to prevent type 2 diabetes: healthy weight, diet and physical activity.

This is a constant tension in building infographics, "How do you balance precision and clarity?" Not specifying type 2 diabetes makes the poster less precise but since type 2 diabetes represents 96% of diabetes in the US (not sure the Canadian data) I agree with the decision to simplify the poster. Type 1 diabetes is small potatoes compared to the public health nightmare of type 2 diabetes. Additionally, because of the potential for diabetes to grow like an epidemic and because we have tools to curtail this epidemic it becomes a good target for public health messaging in a way that type one diabetes does not lend itself. 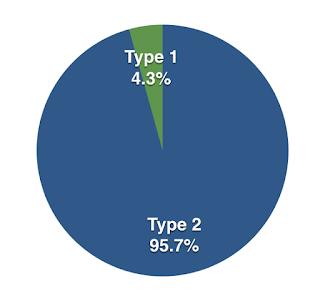 There was then the argument that the therapy is not that effective and that people who follow this advice often still end up with diabetes:


@kidney_boy @WilliamDale_MD @CIHI_ICIS 3/Second, yes, there is evidence that some cases of type 2 diabetes are preventable.
— Holly Witteman (@hwitteman) February 17, 2017

The problem here is that since people have some agency in their disease, others will blame them for getting diabetes. The patients will be shamed because they didn't act strongly enough to avoid the disease. By publicizing ways to avoid diabetes you are setting up people with diabetes to be blamed for their condition. 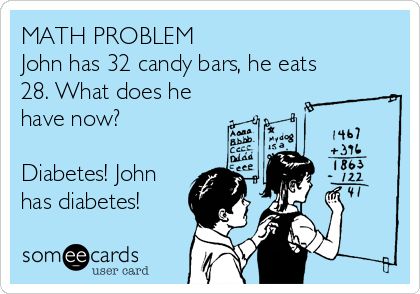 How effective are the items in the poster at preventing diabetes. They are about as effective as any therapy we have in medicine. DPP is the best program to prevent diabetes. See this RCT. What was the interventin in DPP?


The goals for the participants assigned to the intensive lifestyle intervention were to achieve and maintain a weight reduction of at least 7 percent of initial body weight through a healthy low-calorie, low-fat diet and to engage in physical activity of moderate intensity, such as brisk walking, for at least 150 minutes per week. A 16-lesson curriculum covering diet, exercise, and behavior modification was designed to help the participants achieve these goals.

All three items that are being tracked in the infographic.

So what do you get for that intervention? The DPP trial showed

In 2014 1.4 million people developed type two diabetes. A 58% reduction in the incidence of diabetes means that over 800,000 people would not develop diabetes in a year.

That compares pretty favorably to the total population of people with type 1 diabetes: 1.2 million.

The problem with arguing the fact that some people progress to disease despite therapy to prevent it is that none of our medications are 100% effective. If I advise patients to take their ARB because it will help their diabetes and then they develop ESRD anyways, did I invite ridicule on them because I gave them an effective therapy? Will people not provide comfort because if they had just tried harder with their ARB they would not have developed ESRD? I hope not. And that concern should not stop me from making it well known that there is an effective drug for diabetic nephropathy, it is also important to remember the treatment effect in IDNT and RENAAL were pretty modest.

We should not blame people for the diseases they develop but we should not use the fear of that blame to avoid measuring, publicizing, or developing public health initiatives, because it looks like it maybe working. 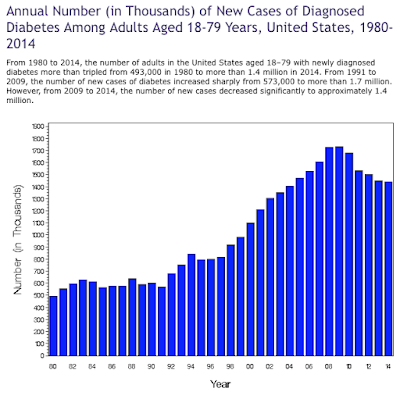 I gave Dr. Witteman an early version of this blog post and an opportunity to respond.

Thanks for the opportunity to respond to your post. I would like to note the following five points.


Thank you for reaching out and offering me the opportunity to engage with you on this issue. As noted in my original 13 tweets, I strongly agree with encouraging healthy eating and physical activity. I also agree with preventing type 2 diabetes and reducing the burden that diabetes can place on people. The problem is that infographics like this typically don't move the needle, and they can even be counterproductive and harmful.

The SPRINT trial was a home run. The study showed compelling data that lowering blood pressure dramatically below what we were previously targeting was both well tolerated and yielded huge benefits to patients. 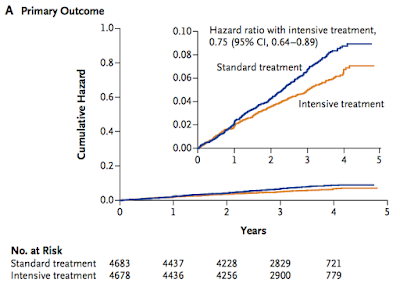 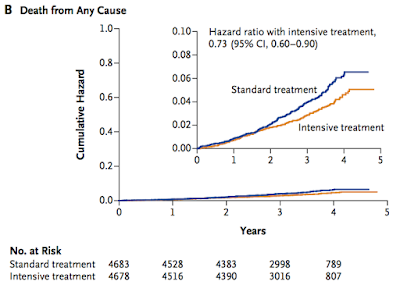 Now there are some questions to the method of blood pressure assessment and how this can be compared to previous blood pressure trials, but I believe that the BP assessment used in SPRINT is more reproducible in offices than the standardized BP typically used in trials that no one howls about (you mean your MA does not follow a 12 step checklist when checking patients in?).

One of the important corollaries that I emphasize when I teach SPRINT is that the study enrolled a very specific patient and we don't know just how generalizable these findings are:

After you accept the all of these concerns and limitations you are left with a study that reduced the risk of death by 27%. NNT for the primary outcome was 62. This is pretty darn good in medicine.
But when counseling a single patient, it is not very compelling. You have to expose 62 people to multiple drugs and the risks of over treatment in order to save one life. Those other 61 people, are all exposed with no benefit. This is just the nature of internal medicine. All we can do is give out a handful of pills in order to load the dice in patient's favor. No guarantees. Just better odds.

Francis Wilson, is pushing the data. He has dissected the SPRINT database further and can select patients that benefit from the aggressive blood pressure reduction while excluding those that won't. He calls it an Uplift Model to Personalize Intensive Blood Pressure Control. This system allows him to reduce the NNT from 62 to 26.

This is Wilson's entry in the NEJM SPRINT Data Analysis. The voting is open until February 28th, go check out the site and vote for the best one, or just vote for the nephrologist. 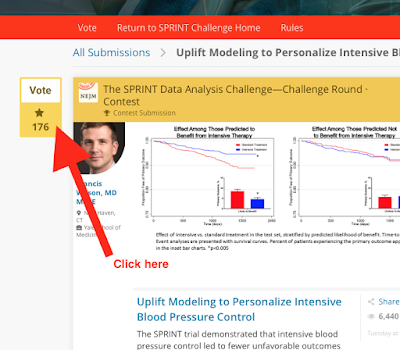 When the Chief Resident calls you up and asks for two lectures in one day I say "Yes sir!"

I did the World's Greatest Potassium Lecture at 8:00 AM. 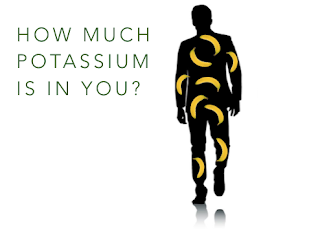 Then I did Getting started in social media for doctors at noon. 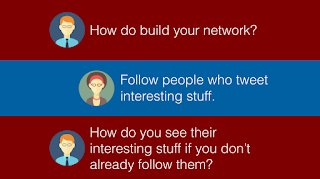 Tricks of the trade: How to insert a tweetstream into a Keynote presentation

If you are doing a talk on social media there will be moment when you want to show a Twitter chat or Storify on a slide. This can be tricky to do quickly. Here is one technique that I use.

Inserting a Storify (or Tweet Stream) into a Keynote presentation from joel topf on Vimeo.