What does renal denervation mean for the future?

Symplicity HTN-2 just published its one-year results. The results are just as impressive as the 6-months results. Symplicity 2 is the first randomized controlled trial of radiofrequency denervation. The technique (described here) uses a catheter to deliver radiofrequency energy to the renal arteries. This denervates the kidneys and decreases sympathetic inflow. The lack of sympathetic stimulation reduces renin and peripheral norepinephrine levels which serve to decrease the blood pressure. The study enrolled patients with resistant hypertension, i.e. uncontrolled blood pressure despite compliance with three anti-hypertensive medications including a diuretic.

The primary end-point was change in office blood pressure at 6 months. An average of 30 mmHg drop in patients with resistant hypertension is incredible!

After the primary end-point, patients randomized to the control group had the option of receiving the procedure and their data is also presented in this update.

In addition to the average drops in blood pressure, the benefits were widespread with 83.7% having a lower systolic BP at 6 months and 78.7% at 12 months.

There was not a statistical difference in number of blood pressure medications used at the end of the trial (see table 5 below) but the results are tantalizing and I believe represent a Type II error. This should be an interesting outcome to keep an eye in the forthcoming Symplicity HTN-3 trial.

The procedure was without complication in 97% of patients (149 of 153 patients). One patient experienced the renal artery dissection on placement of the treatment catheter before RF energy delivery was delivered in that artery. The dissection was treated with renal artery stenting without any subsequent complication or delay in hospital discharge. Three other patients developed a pseudoaneurysm/ hematoma in the femoral access site; all had had an 8F guide and were treated without any subsequent complication.

This data is consistent with the Symplicity-1 results which, though non-randomized, showed a durable anti-hypertensive effect through 3 years. 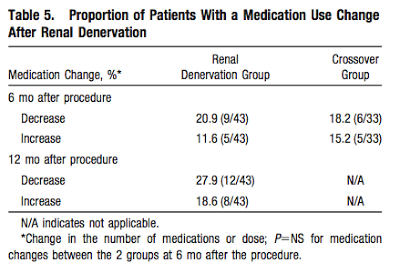 Symplicity-3 is currently recruiting. It is also a randomized controlled trial but it is twice the size of Symplicity HTN-2. Additionally it uses 24-hour ambulatory blood pressures rather than office pressures to measure efficacy.

This looks like an effective therapy and of course we will have to wait until it is approved for wider use but it is hard to look at this technique and see anything but a game-changer. We are looking at a non-pharmacologic therapy for hypertension that does not require medical compliance. Imagine cardiologists, instead of boxing the kidneys with drive-by renal angiograms, actually helping the patient by lowering their blood pressure. Cardiologists helping the kidney, difficult to wrap my brain around that. Brave new world indeed.
Posted by Unknown

Kidney International, you may want to look at your podcasts.

I spend half an hour commuting to work everyday and usually listen to podcasts. My tastes mostly satisfy my unnatural Apple cravings. I listen to a lot of 5x5, TWiT and Slate podcasts, but recently I subscribed to a handful of Kidney podcasts.

I was listening to the Kidney International Podcast and they start interviewing (iTunes Link) Barry Freedman of Wake Forrest. He starts talking about the MYH9 gene. This tweaks my interest and I start paying attention, thinking to myself, "Is this gene making a comeback?" And then he starts talking about the the Nature Genetics papers from 2008. No mention of APOL1. I glance down at my iPhone, the podcast is from 2009. I was relieved that I hadn't missed a major U-turn. Listenning to the remainder on the podcast I can't help but smirk at the hyperbole.

His paper was on hypertension associated end-stage renal disease and its tight association with MYH9. He waxes on about how it is one of the most strongly associated genes in any common disease. He states that if you could remove the MYH9 risk variants from the African American population, 70% of the non-diabetic kidney disease would disappear. He states that MYH9 is responsible for initiating most kidney disease in African Americans and that hypertension is very unlikely to be an initiating factor in kidney disease.

If you are not familiar with the history of this wrong-turn, here is a brief overview: 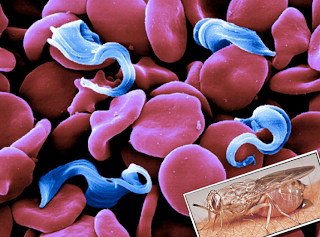 A more thorough rehash can be seen in my Dialysis for the Internist lecture (Keynote, PDF).
While it is hilarious to listen to the certainty of Dr. Freedman's proclamations, the incident also has a lesson for dealing with social media. Publishers, including bloggers, are constantly publishing information that expires. Facts become falsehoods and time reveals truths. However, what we have published remains. Leaving these mistakes, without editorial comment is a disservice to our readers. Even though what we wrote may be buried under dozens of posts, Google still indexes it and still sends readers to this material. Kidney International unfortunately never did another podcast, so when one subscribes to their podcast, this story is what is downloaded as "most recent."

Search and the permanence of internet means that we need to take responsibility for old content, in a way that wasn't necessary in the past.
Posted by Unknown

On Tuesday December 4, I will be presenting grand rounds for St John Hospital and Medical Center. This page has the references, lecture notes and a copy of the slides.

One of the gimmicks of the talk was that a scheduled tweets to drop during the presentation. I also peppered my tweet stream with my talk's hashtag in the 2 days leading up to the talk. This resulted in a nice little buzz of social activity. Looking over the hashtag (#SJHMCsmhc) a day later I found 20 retweets, 14 replies, 11 favorites. This was spread-out over 17 different tweets All way above normal activity for @kidney_boy.


I used HootSuite to schedule the tweets.