Great article on the two new PSA studies in the NEJM 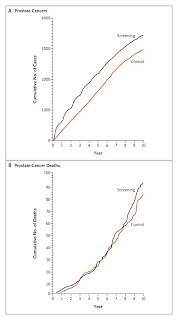 The New York Times has good coverage of the latest data (US Study, European study) on prostate cancer.
I loved this beat which covers the difference between relative and absolute risk and NNT:

[After discussing the 20% reduction in mortality found in the European study] But in terms of individual risk, even that is not a huge benefit. It means that a man who isn’t screened has about a 3 percent average risk of dying from prostate cancer. If that man undergoes annual P.S.A. screenings, his risk drops to about 2.4 percent.

And there is an important tradeoff. P.S.A. testing increases a man’s risk of being treated for a cancer that would never have harmed him in the first place. The European study found that for every man who was helped by P.S.A. screening, at least 48 received unnecessary treatment that increased risk for impotency and incontinence. Dr. Otis Brawley, chief medical officer of the American Cancer Society, summed up the European data this way: “The test is about 50 times more likely to ruin your life than it is to save your life.”