I explained that it was a standard mnemonic along with its cousin MULEPILES. He said that's stupid and that we should make-up our own mnemonic. Five minutes later he came up with PLUMSEEDS, an exact anagram of mudsleeps, and we used that in the book. I thought it would be a marker of who used our book to learn acid-base, if they used plumseeds they were our's otherwise, not so much.

9 years have passed and I have yet to hear anyone use PLUMSEEDS.

This past September, my partner Susan Steigerwalt, put a letter on my desk she photocopied (she's old school) from Lancet. The letter described a new mnemonic for the differential of anion-gap metabolic acidosis: GOLDMARK. This reworked mnemonic had more going for it than an ego test, it was a complete reworking of the old and busted mnemonic for new hotness.

I blogged about GOLDMARK a few months ago and received an e-mail from the lead author. I have since e-mailed all three authors. Here's their story. 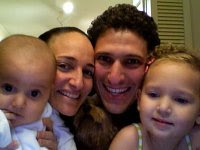 In May of 2008, Josh Emmett a second-year medical student at University of Texas Southwestern was having dinner with his dad Dr. Michael Emmett, Chief of Nephrology at Baylor University in Dallas. Dr. Emmett was telling Josh that he and a fellow were frustrated with MUDSLEEPS/MULEPILES/KUSMALE because of its obvious shortcomings: paraldehyde? No one uses that. DKA, Starvation and Ethanol, all of those cause ketoacidosis. Isoniazid/iron as causes of lactic acidosis? The next time I see that will be the first time I see that. Plus no D-lactic acid, no oxoproline, an issue that must have particularly rankled Dr. Emmett as he was an author on the definitive article on the subject.

Josh, looking for a distraction from his studies volunteered to help craft a new mnemonic. Dr. Emmett and a third-year IM resident, Ankit Mehta (who has subsequentky become a nephrology fellow with Dr. Emmett), came up with the letters they would use and the synonyms for different diseases:

Uremia could be U, R or K (Renal, Kidney)
Ethylene glycol could be A, E or G (Antifreeze, Glycol)
Oxoproline could be O or P (Pyroglutamic acid)
Aspirin could A or S (Salicylate)
Ketoacidosis could be K or D (Diabetes, though that is not nearly as good as ketoacidosis because there are other causes of ketosis besides DKA)

With that list in hand Josh hit the internets and plugged the letters into some mnemonic generating websites and came up with:
After a few days of vetting the possibilities they settled on GOLDMARK.

GOLDMARK has become my standard AGMA mnemonic. Bye bye PLUMSEEDS.
UPDATE: Dr. Ankit Mehta sent me some notes from when they were trying to find mnemonic:

Hi Dr.Topf,
I was cleaning my desk over the weekend and found some papers on which i was scratching some other mnemonics for agma:
As you see none of them are as good as GOLD MARK. Also, some are a stretch of imagination!
hope this helps,
Ankit.