The Nephrology Blog has an interesting post on early nephrology referral of CKD patients and outcome on dialysis. I pulled all the references from that paper which have looked at the subject. I'll be adding my thouhts on these references over next few pages so that this post becomes a quasi review article or annotated reference list.

Forty-four patients who commenced renal replacement therapy between January 1983 and January 1988 died within 1 year of starting treatment. To examine the factors influencing early mortality of patients on renal replacement therapy these patients (group A) were compared with a group of 44 age- and sex-matched subjects who started dialysis over the same period and who survived more than 1 year (group B). The interval between first presentation and dialysis was significantly shorter in group A (median 36 days) than group B (median 30 months) patients. Plasma urea and creatinine were significantly greater in group A than group B at the time of first presentation to a nephrologist but not at first dialysis. Patients in group A were more often treated first by hemodialysis. Systemic disease as the cause of renal failure did not appear to influence early death. Early death on renal replacement therapy appears to be associated with late referral to a nephrologist. Early referral may be beneficial because it allows for planning of dialysis and treatment of the complications of progressive uremia.

BACKGROUND: Recent observations in our country have shown that late diagnosis of chronic renal failure (CRF) is an important cause of late referral and late commencement of maintenance dialysis. We prospectively investigated the influence of late diagnosis of CRF on patient mortality during dialysis therapy. METHODS: Among 184 consecutive patients with nondiabetic end-stage renal disease starting chronic dialysis at the Federal University Hospital in the city of São Paulo, 106 had a late diagnosis of CRF (less than 1 month before starting dialysis) and 78 had an early diagnosis. During the first 6 months of dialysis treatment, patient survival was compared in the two groups, using the Kaplan-Meier method and the Cox proportional hazards model. RESULTS: Six-month patient survival rate was lower in the late than in the early diagnosis group (69% versus 87%, P less than 0.01). In the late diagnosis group, the hazard ratio of mortality was 2.77 (95% CI, 1.36-5.66) times that of the early diagnosis group. In a multivariate analysis, after adjusting for age, comorbid illness, and serum biochemical measurements, time of diagnosis did not remain significantly associated with mortality risk. In this analysis, age, pulmonary infection, and low serum albumin were significant predictors of mortality. CONCLUSIONS: Patients with a late diagnosis have a higher mortality risk during the first 6 months of maintenance dialysis. This increased risk is related to comorbid conditions, some of which could be prevented by predialysis care. Interventions to promote early diagnosis of CRF and adequate predialysis follow-up need to be evaluated if the survival of patients with chronic renal failure is to improve. 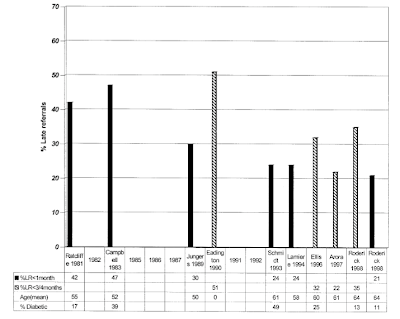