week-end call and a pair of crazy numbers: Glucose and Calcium

I saw the highest glucose I can remember in a patient without ESRD. I have seen the glucose go over 2,700 in a patient with the misfurtune to have both DKA and anuric ESRD. Without the osmotic diuresis to lower the glucose the glucose can shoot the moon. This patient had HyperOsmolar Non-Ketotic Coma (or HONK as my fellow calls it, love that) and baseline Cr of 0.83 and a peak glucose of 1,600 mg/dL. 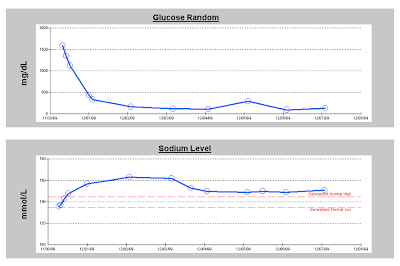 I love the twin graphs showing the falling glucose and the simultaneous resolution of the pseudohyponatremia. The patient had enough pre-existing osmotic diuresis to cause hypernatremia which was masked by the hyperglycemia. As the glucose comes down the sodium goes up from 136 to 162.


Calcium
The other crazy number was the most severe hypercalcemia I have ever seen. The calcium was 18 mg/dL with an albumin of 3.7 g/dL. The patient is a kidney transplant recipient who was recently seen in the outpatient clinic with hypocalcemia. His calcium was 6.5 and his calcitriol was increased from 0.5 mcg to 1 mcg twice daily. He was also continued on his calcium carbonate.

The other pertinent calcium labs:

I think this is milk-alkali syndrome from the calcium carbonate exacerbated by the calcitriol. One supporting string of evidence supporting this is the fact that his calcium came down and has not reoccurred. If it was hypercalcemia of malignancy I would have expected his calcium to be resistant to conservative therapy. 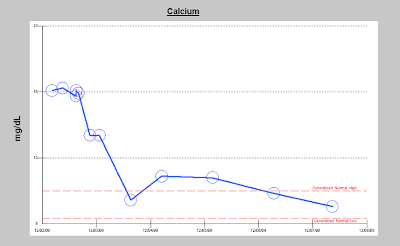