ACEi, ARBs and Aldo Antagonists and the risk of Contrast Nephropathy

This is a question that comes up during almost every consult in patients with CKD about to receive contrast exposure. Should we stop ACEi and ARBs prior to exposure?

The data is confusing as summarized in the introduction to this latest analysis:


...Some studies have demonstrated that chronic medication with angiotensin-converting enzyme inhibitors (ACE-I) or AT-1 blockers was a risk factor for CIN [19,20], whereas other studies [21,22] found a protective effect in patients with CKD when exposed to CM.


If that doesn't meet the definition of equipoise, I don't know what does.

There still isn't any prospective data but a recent reanalysis of a large (negative) trial on the use of hemodialysis to prevent contrast nephropathy attempts to answer the question.

When the baseline characteristics are separated by the presence of contrast nephropathy it reads like a rogues gallery of risk factors of contrast: 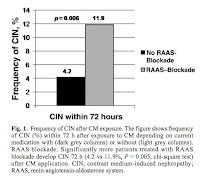 The multivariate analysis showed RAAS blockade and hemoglobin to be independent predictors of contrast induced nephropathy: 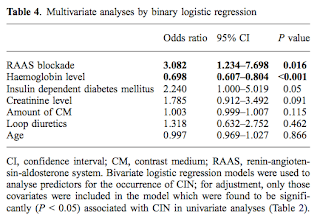 The data is sure suggestive of an effect but given that both CKD and CHF are risk factors for contrast nephropathy and RAAS blockade is a first line therapy for both diseases I fear we could be looking at a classic bias by indication.

This is a question that is begging for an interventional trial. I'd let my patients be randomized to d/c ACEi/ARB versus no discontinuation. It sure would be better than another damn study on loop diuretics, mannitol and IV fluids 2009 (Hey AJKD! 1994 is on the phone and they say they'd like their study back).