How to make a cool clinic diagnosis

I had a great case yesterday in clinic.

The patient was a 55 year old woman with HIV and a chief complaint of gradually climbing creatinine. Among her medications were Truvada and Norvir. 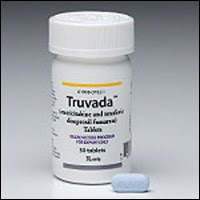 Truvada is one of three brand name drugs that contains tenofovir:

Tenofovir rarely causes renal failure through proximal tubule toxicity. One of its hallmarks is a Fanconi syndrome, though the renal failure can occur without Fanconi's. Fanconi' syndrome is generalized dysfunction of the proximal tubule, so metabolites normally reabsorbed in the proximal tubule are wasted in the urine. Patients have amino aciduria, bicarbonaturia (RTA type II), inappropriate phosphaturia and glucosuria. Because of the increased phosphaturia, hypophosphatemia is a surprisingly sensitive indicator of tenofovir toxicity (20/20 cases).

This patient's creatinine rose from 1.4 in March of '09 to 1.7 in November. The primary care doctor that handles this patient's HIV had checked an ultrasound (9 and 10 cm kidneys), and albuminuria (400 mcg/min).

Here are the results of his U/A we did in the clinic: 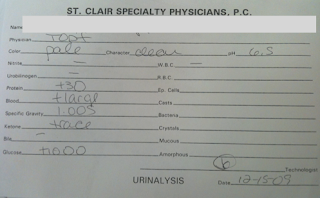 I focused on the glucosuria and concluded that if her blood sugars are normal then she must have proximal tubular dysfunction and likely tenofovir toxicity.

Her blood sugar was 87. The Tm for glucose is roughly 200, so a serum glucose of 87 should not cause any glucosuria.

The Truvada was stopped. The patient is also on ritonovir (Norvir). Ritonovir is found in 72% of patients with tonofovir induced Fanconi's syndrome, so it maybe an important co-factor in the development of this condition. We did not stop the Norvir, should we?

I will follow up with the patient in the month. Hopefully she will do well.

Here is a talk I gave on HIV and the Kidney: