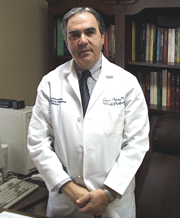 Jose Arruda, Chief of Nephrology, UIC Medical Center
I was excited to see Dr. Arruda on the schedule to speak at our fellowship. This is one of the best aspects of being an academic nephrologist; we get prominent nephrologists from around the country to speak to our department.
When I saw the title of his lecture was A New Approach to Hyponatremia, I knew we were going to get the vaptan story (PDF).

Otsuka is pushing tolvaptan (Scamsca™) hard. We are getting detailed a lot, and I hear that the cardiologists are also getting an earful. Honestly, the data looks a little thin to me. The drug is the most reliable method for tackling persistent SIADH. But that's rare. In my experience, usual care fixes almost every case of hyponatremia within a day or two. There are a minority of cases that don't respond quickly. These episodes of persistent hyponatremia worry me. Unfortunately, tolvaptan doesn't feel like a good option for these patients. We know from the SALT studies that a week after you stop the drug the sodium equals the control group and the drug costs $300 per day (average wholesale price (PDF), retail price). I find it hard to prescribe a $9,000 per month drug for chronic therapy. I'll stick with salt tablets, furosemide and water restriction. 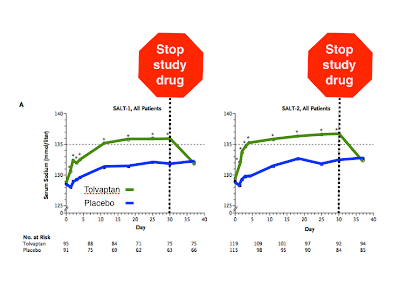 Arruda's lecture was on tolvaptan and the first slide was giving some background on hyponatremia and he commented that "I hate this slide." I can't imagine putting together a presentation and flying 500 miles to present it and loathing the very first slide.
It is illustrative of what is wrong with academic nephrology. Dr. Arruda hates the first slide in his deck. Why doesn't he remove/fix/change the slide? Because the slide deck has been vetted by the FDA and Otsuka's lawyers. He can't change it. He has signed a contract saying he won't change it. Dr. Arruda gave a solid, thoughtful lecture to our department, but he did that in spite of the materials he was using. He spent considerable time just talking about the pathophysiology of sodium and did a better job than most at avoiding being a mere shill for Otsuka.
Our nephrology program, and I suspect others (most?) rely on the generosity of pharma companies to bring scientists to our program but we pay by letting the drug companies supply the slides. Tragically, those slides are vetted by people uninterested in education and devoted to meeting the conflicting demands of both the marketing and legal departments.
Dr. Arruda seems like a good guy and is a highly respected nephrologist but the only way we could get him to come to Detroit was on Otsuka's dime and they were able to control the message.
Posted by Unknown