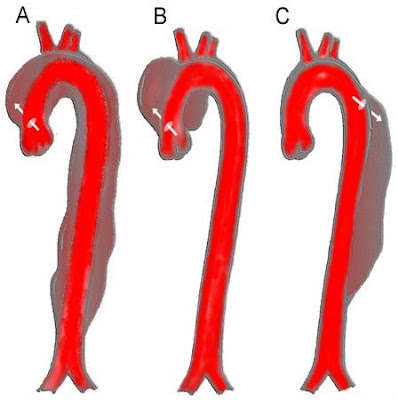 I have a patient who had an Type B aortic dissection from her left subclavian artery to somewhere south of the renal arteries. She was managed medically. Today, a decade removed from the aortic dissection, she was admitted with recurrent expressive aphasia. As part of that work-up she received a carotid doppler that did not show carotid narrowing as we were looking for but rather a carotid tumor.
She received a CT angiogram of her neck to evaluate the tumor. The CT scan revealed bilateral upper lobe pulmonary emboli. As far as we can assess these have been asymptomatic. I told her we are going to anticoagulate her but and she refused on the basis that it could worsen her dissection. The dissection was still present on the most recent CT scan.
What a bazaar scenario:
Here is a review of conservative aortic dissection management from the Annals of Thoracic Surgery.

We examined all case records for acute (less than 2 weeks) type B aortic dissection treated at The Mount Sinai Hospital since 1985. The review identified 68 patients, 42 male and 26 female, with ages ranging from 32 to 96 years (mean, 65.5 years)... 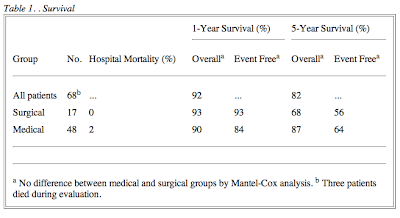 No difference was found in one or five year survival when the cohort was divivded by the timing of the surgery. No attempt was made to look at the year of enrollment and whether that a difference in survival.

Another case series: Management and long-term outcome of aortic dissection. (Full Text). Mixes Type A and B patients.
I could find no evidence to support the patient's belief that she should avoid anticoagulation.
Posted by Unknown