The second article in this week's Journal is Functional Status of Elderly Adults before and after Initiation of Dialysis.
The introduction references the following study and states that in 1999:
The investigator used the USRDS and The Minimum Data Set, a database of nursing home residents that all Medicare and Medicaid certified nursing homes must participate contribute to. The study cohort consisted of people who were in the nursing home prior to starting dialysis. Patients were included if they had a functional status assessment prior to initiating dialysis. This resulted in a cohort of 3,702 residents.
Functional status was measured by grading the following skills on a scale from 0 (total independence) to 4 (dependence):
Increases in scores A second measure of functional status, MDS-ADL, was also used. Demographic, co-morbidity data was collected from the Form 2728 genereated by the nephrologist at the time of the initiation of dialysis.
200 patients were excluded from the analysis because they failed to have a funcrional status assessment prior to starting dialysis. These patients were healthier than the study cohort. I don't feel this is a critical bias as this represented a rather small fraction of the cohort. My guess is the results of this study fairly represent the population of dialysis nursing home residents. 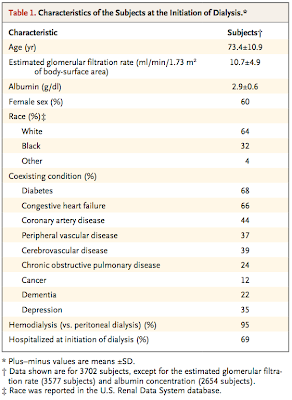 The key points are beautifully rendered in two charts. The first shows the mortality of the cohort following the initiation of dialysis:

The bars represent the timing of the ADL assessment. The dotted line is cummulative mortality. The red arrow is the half-life of this population. Half the cohort is dead before 9months!
Looking at the mortality alone one must wonder if the patients are receiving any survival benefit from dialysis. It is hard to imagine the mortality is much worse if they didn't get dialyzed.
The meat of the article is in next graph that shows the distribution of functional status every 3 months. It goes back a year prior to initiating dialysis and follows forward for the first year after initiating dialysis. Patients demonstrate a stable functional status until the 3 months prior to starting dialysis. In the three months prior to initiation there is some subtle decreases in functional status but that really accelerates as soon as they start dialysis.

The combined end points of death and deterioration are shown in a bleak graph: 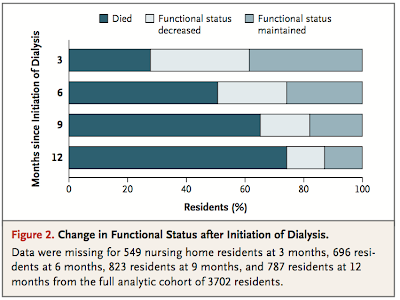 What a depressing study, both mortality and morbidity. It forces nephrologists to question the role of dialysis in nursing home residents. This is a population that does terrible on dialysis.
Posted by Unknown