Its not the sodium intake its the sodium:potassium ratio

Don't worry only about sodium intake (NYC, I'm looking at you) and its not just potassium intake (DASH diet in the cross-hairs). It's all about the sodium potassium ratio. This is shown by Cook et al (PDF). during reanalysis of the Trial of Hypertension Prevention I and II. This trial had serial 24-hour urine collections done in 2,275 patients with pre-hypertension in the late 80's and 90's. The investigators looked at that data through the lens of 15 years of follow-up to determine the risk of cadiovascular events:

In observational analyses of the mean urinary excretion during 11⁄2 to 3 years, we found a suggested positive relationship of urinary sodium excretion and a suggested inverse relationship of urinary potassium excretion with risk of CVD, but neither was statistically significant when considered separately. Both measures strengthened when modeled jointly, with opposite but similar effects on risk. However, the sodium to potassium excretion ratio displayed the strongest and statistically significant association, with a 24% increase in risk per unit of the ratio that was similar for CHD and stroke and was consistent across subgroups.

Here is the key figure. Note in the graph the rate of events is presented on a log scale so the 2 indicates a rate 100 times the rate at zero. 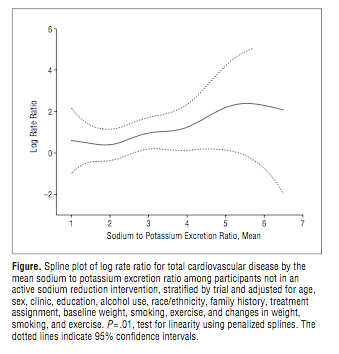