I plan on doing four posts on hyperkalemia from this lecture:
The lecture started off with the case I blogged about last week with the scary EKG and the potassium of 9.9.

I focused on a well done study (Full Text) by Drs Montague, Ouellette and Buller from Yale. They looked at 90 patients with a potassium grreater than 6 and an EKG done within an hour of the potassium. They excluded hemolyzed specimens and patients with cardiac pacing or other conditions which would mask EKG changes.

They graded all the EKGs according to a prospective criteria and recorded the cardiologists assessment. 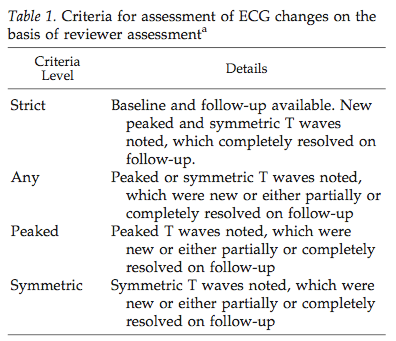 The average patient was 73 years old (20-93) and half had acute kidney injury (55%) and half had chronic kidney disease (47%). They did not comment on the degree of overlap between those groups. Half the patients had diabetes (55%). Only 31% were on ACEi and 30% on loop diuretics.

The reading cardiologist documented peaked T waves in only 3 of 90 patients with hyperkalemia. The investigators were able to find peaked T waves in only 29. QRS widening was found in only 6 patients. Of the 52 patients who could have been classified as having "Strict Criteria" (you needed a second EKG after resolution of the hyperkalemia and not everyone in the cohort had a second EKG) only 16 actually met strict criteria. 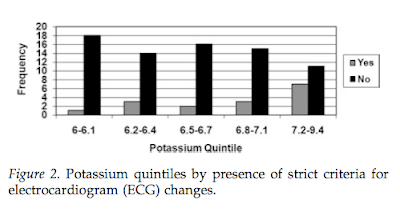 The authors found EKG criteria to be insensitive predictors of hyperkalemia:
Interestingly, they found that acidosis decreased the likelihood of finding peaked T-waves.

When they looked at arrhythmias as an outcome, EKG changes continued to be a poor clinical guide. They were not sensitive: only one of the patients who subsequently developed an arrhythmia or cardiac arrest had previously met the strict criteria for EKG changes and only 7 had any T-wave findings at all. This is important because it emphasizes the fact that you can not be reassured by a normal EKG in a patient with hyperkalemia.

Take home message: a normal EKG should not rule out hyperkalemia and should not decerase your concearn for impending arrhythmia.

Here is the lecture this post is based on:
Whats New In Potassium
View more presentations from Joel Topf.
Posted by Unknown