Is hypertension in octagenarians a characteristic or a disease

I was at the NKF Spring Clinical meeting and I saw variations of the two following slides in at least three different lectures: 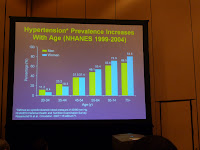 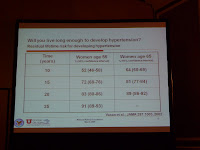 The slide on the left comes from the AHA Heart Disease and Stroke Statistics from 2007 (PDF). It shows the increasing prevalence of hypertension as people get older. The slide on the right is from the Framingham Heart Study (PDF) and shows the 20 year risk for normotensive adults for developing hypertension. Both figures are repeated below: 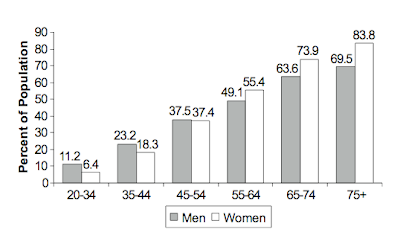 The part of these figures that kept gnawing at my brain was putting them together, stacking them if you will. 60-70% of the sixty-year olds have hypertension and the minority that are normotensive have a 90% chance of developing hypertension by the time they are 85. So essentially every 80 year old has hypertension.

Does hypertension cease to be a disease when everybody has it? Is hypertension less pathology and rather part of the normal physiology of aging?

Speaking against the idea of geriatric hypertension being normal physiology is the powerful survival advantage gained by treating the high blood pressure. This data comes from HYVET published last spring in the NEJM (PDF). Prior to HYVET there was retrospective data pointing to better survival with higher blood pressures (Oates 2007) and a meta-analysis of 80+ year olds enrolled in RCTs showed a reduction in cardiovascular evens but a trend to increased total mortality.

The HYVET ransdomized 3,845 octagenarians with blood pressures 160-190 with a diastolic of less than 110 to either placebo or indapamide (thiazide-like diuretic) with additional perindopril if the systolic blood pressure remained over 150. The primary end-point was number of strokes (fatal + non-fatal)

The effect on morbidity and mortality were dramatic (all results expressed as intension-to-treat) with active treament resulting in: 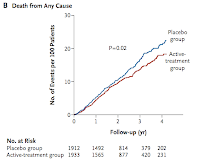 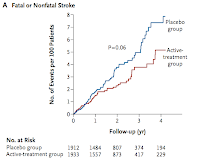 Click on the graphs to see larger versions.
So even if hypertension in the elderly is not a disease, treating it seems to have dramatic benefits for patients. Vote your opinion!
Posted by Unknown