The Sugar Fix: Chapter 2: The birth of dietary sugar comes about 10,000 years ago in New Guinea. Johnson states that this moment is one that alters history as few other discoveries have. 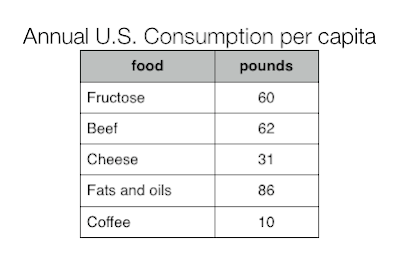 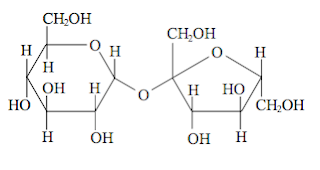 Sucrose. Note: glucose is on the left and fructose on the right 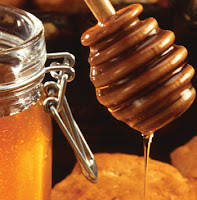 Fructose is he sweetest monocachide, about twice as sweet as glucose. Most high fructose corn syrup is about 50-60% fructose about he same amount of fructose as found in table sugar. Honey is 70% fructose. Almost all of the fructose we get in our diet comes from sweeteners added to foods.

The drive to eat sweet foods is inherent in our humanness. We don't need to be taught that fruit tastes better than vegetables. Johnson lays out a teleological argument that follows:
He suspects that ancient humans ate only 15-20 grams of fructose a day (equivalent to two pieces of fruit) this compares to contemporary humans eating 70-80 g a day.

India was the first country to boil the juice from the New Guinea sugar cane to produce crystalized sugar.

Persian invaders brought home sugar and then the Arab invaders of the 7th century spread sugar from Persia to the rest of the Middle East.

The crusades brought sugar back to England in 1099.

Sugar was thought to have medicinal values and sold at pharmaceutical like prices. In 1319, sugar cost the equivalent of $50 per pound.

Sugar was one of the crops which supported the slave trade between Africa, North America and Europe.

England became a dominant producer of sugar and by 1700, the English were ingesting 4 lbs of sugar a year.

The democratization of sucrose accelerated following the discovery of the by which sugar could be extracted from beets.

In 1866 scientists in Buffalo invented a way to convert corn starch into sweet tasting corn syrup. Corn syrup is made of glucose chains of varying lengths. There is no fructose in corn syrup, so it is not as sweet as sucrose.

In the 1960s, glucose isomerase was discovered. THIS enzyme could convert some of the glucose in corn syrup to fructose ushering in high fructose corn syrup (HFCS).

HFCS is cheaper than sugar mainly because of the phenomenal overproduction of corn in this country. See the Omnivore's Dilemma. By the end of the 70's Americans were eating 10 pounds of HFCS every year.

In 1982 the US Government began to limit the amount of sugar which could be imported every year and by 1984 both Coke and Pepsi converted from sucrose to HFCS as the primary sweetener in their respective colas. The sweetwener in most colas is HFCS-55 which has 55% fructose only slightly more than sucrose, 50%.

Johnson states that another common variety of HFCS found in non-carbonated fruit juices is HFCS-42 (42% fructose).

He then claims that much of the harm from HFCS is not because it is anymore toxic than equal amounts of sucrose but rather that, its low-cost has resulted in more consumption.

This explains the expansion in the sizes an portions over the last 20 years. He points out the change in the size of a single serving of Coke. In the fifties it was 6.5 oz and now I am seeing 1 liter bottles (33 ozs) for sale. 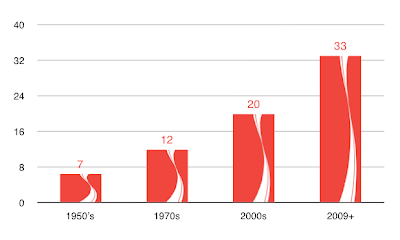 The conclusion of the chapter has this wonderful sentence:

More to the point, the composition of basic nutrients that most people eat today is vastly different from what early humans consumed, or even what the typical American ate a century ago.