Wolf has been everywhere and is one of the premiere scientists elucidating mineral metabolism. He was the senior author on the article in the NEJM on FGF-23 and dialysis survival and the recent article on the survival advantage with phosphorous binders. 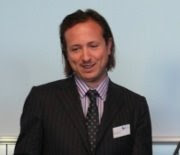 Just a quick review of FGF-23 so I'm not an idiot when this rock star nephrologist starts talking. (FYI don't let the clean cut pic above fool you, he came to the lecture in full rock-star fashion with the long hair, groupies (supplied by Genzyme) and everything)

FGF-23 is produced by osteocytes.

Klotho seems to be a required co-factor for FGF-23, such that mice that are Klotho deficient mimic the phenotype of FGF-23 deficiency.

Some of the biology is still a mystery. The highest density of fgf-23/klotho receptors are located in the distal tubule but the biologic effects stem from the proximal tubule.

FGF-receptor and Klotho are also found in the parathyroid gland but the exact role it plays is unclear. Some data points to direct stimulation of PTH and both molecules tend to rise together but this may be due to FGF-23 surpressing 1,25 OH D and secondary increases in PTH.

Increased phosphate and 1,25 vitamin D both stimulate the production of FGF-23. [Note Wolf provided data that phosphate levels do not increases FGF-23. He proposed that it is phosphate balance that is important, his supporting data included lupron treated patients bump their phosphorous by half a point but FGF-23 doesn't budge, I couldn't find this article on Google]. The Phex endopeptidase cleaves and inactivates FGF-23 so that is another control factor. [Wolf also discussed iron infusions causing phosphorous wasting due to excess FGF-23 ref pubmed related search] 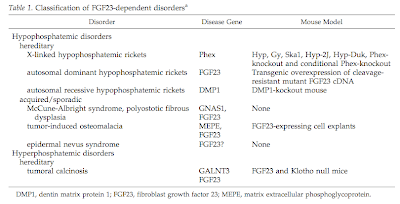