EKGs that will soil your shorts

A long time dialysis patient of ours came to the ED yesterday with the chief complaint of "weakness."
She had not missed any dialysis in the last week. She had gone to the farmer's market on Saturday (2 days prior to admission) and had purchased some melon. She ate two melons on Saturday and a third on Monday morning. Additionally, she had potatoes on Saturday night and Sunday morning.
On arrival to the ED this was her initial EKG (click on the image for a larger picture): 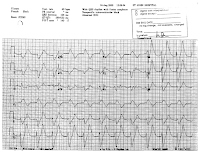 The potassium was still pending at this time and no action was taken on those peaked Ts and widened QRS.
Fourteen minutes later the EKG deteriorates to a terrifying sinusoidal pattern: 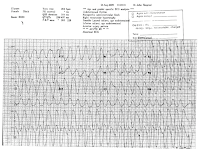 Potassium was still pending but based on the EKG and history of end-stage renal disease she was given two grams of calcium chloride. The CaCl2 was given via a peripheral line. Calcium chloride should be given only via a central line due to the devastating consequences of extravasation of calcium chloride. However, calcium chloride provides three times the calcium as calcium gluconate and is more effective at squashing hyperkalemic arrhythmias. I aplaud this boldness, as it looks like this patient is about to arrest.
The calcium worked great. A minute later things cool down: 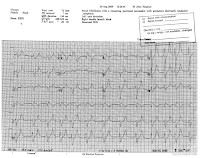 Around this time the potassium came back at 9.4 mmol/L. The patient was then given 4 units of insulin. The low dose is typical of our ED as they tend to be skittish about giving 10 units of insulin to ESRD patients due to concern over symptomatic hypoglycemia. They chased the insulin with an amp of D50 and sixty grams of Kayexalate. The glucose was 84 mg/dL prior to the insulin and D50.
Eighteen minutes later the QRS is down to 128 msec from 168 on the initial EKG: 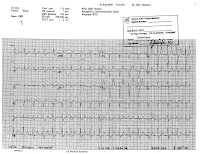 The patient then went for dialysis for 3.5 hours. Two hours with a zero potassium bath and 90 minutes on a one potassium bath. The potassium the next day was 5.5 mmol/L.
Posted by Unknown