Delta anion gap. Not as good as we think it is. 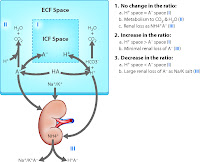 One of the concepts that is regularly taught in the evaluation of acid-base status is determining if there are multiple acid base disorders by evaluating the ratio of the delta anion gap/delta bicarbonate.

I teach this concept as determining what the bicarbonae would be in the absence of or prior to the anion gap.

[Some authors] suggested that mixed disturbances should be considered if the ratio is less than 0.8 or greater than 1.2. Paulson, applying this rule to a group of normal control subjects and patients with simple metabolic acidosis, noted that the formula erroneously categorized 56% [specificity of 44%] of this group as mixed disturbances. Use of the 95% confidence interval of ±8 mEq/L increased the specificity to 97% but with a poor sensitivity of only 27%.

That's terrible. Why torture the brains of medical students with this type of worthlessness.
Good review here.
Posted by Unknown