Once you go beyond the modified Ponticelli, the treatment of idiopathic membranous feels like hunting in the woods. I have a woman in her late thirties who I have been treating for almost three years. She has between 6 and 10 grams of proteinuria, no renal failure (Cr or 0.8 and stable) no hypertension, and a middling albumin with terrible lipids. She doesn't get much edema and is able to limit her use of loop diuretics to very occasionally.

We started with conservative therapy for 6 months to see where the proteinuria is going. After that we decided to give treatment a try because of the heavy proteinuria. She also had high levels of urinary IgG and urine beta-microglobulin.

She was reluctant to use cyclophosphamide because of concerns about future fertility. And I'm reluctant to use it in a young patient especially for a disease which is causing her minimal problems right now. 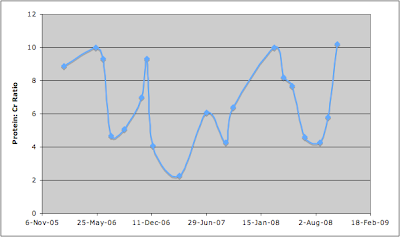 We started with MMF. Little effect.

We then gave a trial of CSA. Little effect.

We gave a trial of Pentoxifylline (Trental). little effect

Anyone have any experience with ACTH?

I must say I have been seduced by the preliminary data (case series, rct) on ACTH. To me it looks more compelling than the alternatives (rituximab and tacro). The fact you have to go to a specialty pharmacy to get the stuff is a little intimidating.

Link to a description of membranous nephropathy from a lecture I give on Hep B, C and HIV associated renal pathology.
Posted by Unknown