So why is there a low level of uric acid with euvolemic hyponatremia? Let's first look at what happens to uric acid in the other causes of hyponatremia, namely hypovolemic and hypervolemic. In both of these situations the kidney is experiencing decreased perfusion, either from absolute volume depletion (diuretics, diarrhea) or perceived volume depletion from pump failure (CHF) or fluid maldistribution (cirrhosis and nephrotic syndrome).

In these volume depleted states there is an increase in the filtration fraction, i.e. more of the plasma that enters the glomerulus is actually filtered. This is how the kidney compensates for a decrease in renal plasma flow while maintaining GFR, it increases the fraction of fluid that is filtered. 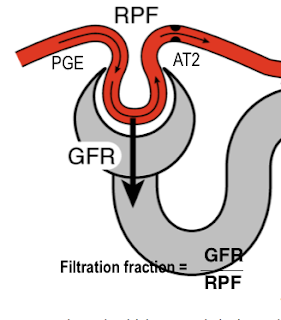 This plasma then enters the vasa recta where it surrounds on the proximal tubule. Here the increased oncotic pressure pulls more fluid back. 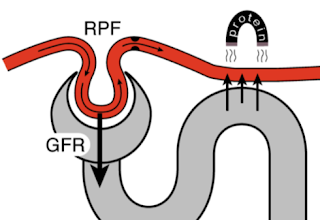 Uric acid handling is complex and not fully worked out.

It appears that there is both uric acid secretion and reabsorption in the proximal tubule.

Functionally, uric acid clearance tracks with renal perfusion:
This is similar to what we see with urea. The following description of urea handling gives a model that will work for uric acid, though the truth of uric handling is much more complex.

Now what happens in euvolemic hyponatremia.

Sodium in equals sodium out. This means that these patients do not have a primary volume abnormality as we see in the hypovolemic and hypervolemic patients. Because of this their sodium regulation volume regulation system is not stressed, they are at homeostasis with regards to body sodium. When you are in homeostasis, in order to stay in homeostasis you need to excrete all the sodium that comes in. In other words sodium in equals sodium out.

However these patients are not in water balance. they have a disease that forces their ADH to 11. They have a fixed ADH secretion and it is set at full blast. This minimizes urinary water excretion, but they are able to stay in sodium balance. So the net of this is they make only a little bit of urine but that small amount of urine carries all of their ingested sodium (sodium in = sodium out) so the sodium is excreted in a small volume at a high concentration.

Now the obvious problem here is that they are holding on to an excess of water. And that will increase their total body volume. This is subtle and doesn't cause edema, or heart failure, or fluid overload in the lungs, but it is there. This fluid overload suppresses angiotensin 2 and decrease sodium resorption in the proximal tubule and hence decreases urea (and uric acid in our model) reabsorption.

And yes this does mean it is not exactly sodium in = sodium out, there will be a slight excess of sodium excretion.
Posted by Unknown