Bayesian statistics and the absurdity of 70% sensitivity for colon cancer

I saw a patient with this lab in their chart:

Who the hell thought a test with a sensitivity of 70% would make a good screening test? pic.twitter.com/PvO21omMFJ
— Joel Topf, MD FACP (@kidney_boy) March 30, 2016

I got some push back:

@kidney_boy sens+spec impt in diagnostics, also I think you're missing that test is for those who can't/won't be screened by other methods
— Shannon P (@kentuckyshan) March 30, 2016

I don't know anything about Methylated Septin and not much more about colon cancer but a 70% sensitivity for a screening test seems a bit absurd. So I ran the numbers.

Getting a negative Methylated Septin result lowers the post-test probability to 0.2%. 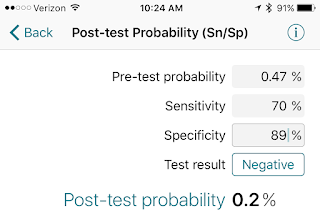 Getting a positive Methylated Septin result increases the post-test probability to 2.9%. 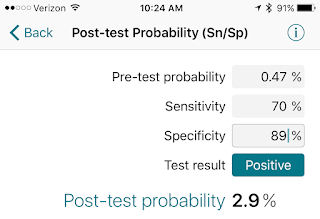 Think about that, 97% of the people with a positive Methylated Septin* are actually cancer free. 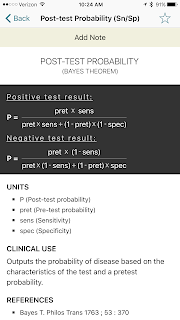 *assuming you are testing an unselected population.
Posted by Unknown