How I used my newly acquired PubMed skills

Yesterday I gave one of my favorite lectures, Renal Adventures in Imaging.


After I finished the lecture I spent some minutes playing with my new skills on PubMed and found this article: N-acetylcysteine effect on serum creatinine and cystatin C levels in CKD patients that completely goes against one of the figures and points of my newly scribed chapter: 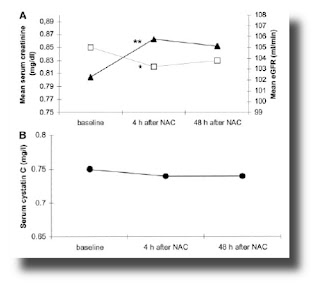 After Tepel published his original work on acetylcysteine in 2000 everyone went a little crazy drinking the Mucomyst cool-aid. Here was a cheap, safe and already approved, remedy to the pervasive problem of contrast nephropathy. Everyone was so drunk with the excitement that they didn't note that the 85% reduction in contrast nephropathy was not associated with a reduction in the need for acute dialysis or a reduction in patient morbidity and mortality.

In 2004, Hoffmann Et al. published the above quoted article which showed a modest but significant reduction in serum creatinine following ingestion of acetylcysteine. This seemed to me to be the best explanation for why a therapy could prevent an increase in creatinine but not prevent dialysis. (Data on the lack of prevention of dialysis from Miner et al. Am Heart J 2004.)

Apparently the patron saint of contrast nephropathy, Richard Solomon, recently reevaluated this theory and found it lacking. He took 30 patients with GFR < 60 mL/min and given 1,200 mg of acetylcysteine every 12 hours for four doses. Creatinine and cystatin C were measured at baseline, 4 and 48 hours after the last dose of acetylcysteine. They found:


Serum creatinine and cystatin C levels did not change significantly at either 4 h or 48 h following the last dose of NAC compared with the baseline values (Table 2; Figures 1 and 2). However, a small but statistically significant reduction in the ratio of serum creatinine to cystatin C was observed at 4 h but not 48 h. 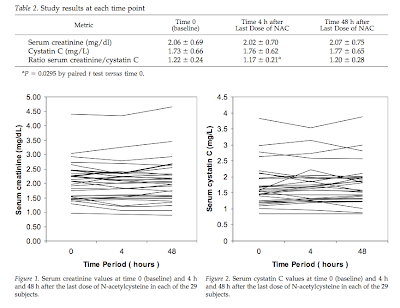 click to enlarge
Solomon postulates that in patients with chronic kidney disease (a population that better represents the people who actually are given contrast nephropathy prophylaxis) the proximal tubule secretion of creatinine may already be maximized so that it cannot be further upregulated by acetylcysteine.
The end result is that changes in creatinine found during acetylcysteine administration likely represent changes in GFR and are not merely artifactual.
Posted by Unknown