Hypokalemia can induce rhabdomyolysis. The purported mechanism is that hypokalemia antagonizes one of the natural causes of exercise induced vasodilation. Normally, during exercise muscles release intracellular potassium causing local pockets of hyperkalemia which triggers vasodilation and increases perfusion to the active myocytes. Total body potassium depletion and hypokalemia decrease local hyperkalemia preventing the vasodilation which results in tissue hypoxia and rhabdomyolysis.

In The Fluid and Electrolyte Companion we illustrated it thusly: 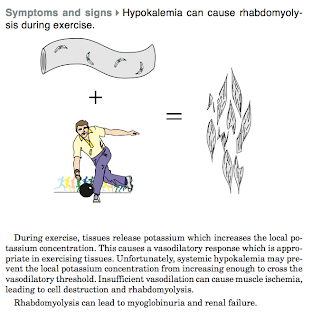 I remember thinking how funny it was that we used bowling to represent exercise (though we did slide in those runners behind the bowler).  Oh clipart, how much nerdtainment you have given me.

This past week-end one of my patients experienced this. He is a high school student who loves to fish. He has congenital type 2 RTA, so is predisposed to hypokalemia. The exercise that triggered his rhabdo:  fishing. He presented to the ER following a day of fishing with complaints of muscle cramps and weakness. His potassium was reported as less than 2, with CPKs in the 800 range.

One of the unexpected consequences of the rhabdomyolysis was that his cramping continued after the potassium was corrected. In fact, it was actually much worse muscle spasm and tetany of the hands. Turns out, this second round of neuromuscular symptoms weren't due to hypokalemia but rather rhabdomyolysis induced hypocalcemia. He had a normal total calcium and a low ionized calcium. The muscular symptoms responded to a gram of IV calcium gluconate.
Posted by Unknown