Articles that changed the way I practice: Sodium intake, hypertension and mortality 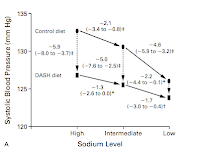 I have long been skeptical towards the party line that salt intake is a driver of high blood pressure, as I wrote here and here. Though hypertension is nearly unheard of in primitive cultures with sodium intake below 50 mmol/day (1.6 g day), increasing sodium intake has modest effects on blood pressure. Three mm of systolic per 100 mmol of sodium (2.3 grams) according to the Intersalt Study (PDF). This 3 mm of systolic agrees with the change in blood pressure in the DASH-Sodium trial. Similar effect size has been documented in meta-analysis:
Despite these seemingly modest results all of the clinical practice guidelines on hypertension have adopted sodium restriction as a key part of blood pressure control:
My position when talking with patients about dietary modifications for high blood pressure had been to mention sodium restriction and weight loss but focus on the DASH diet (PDF) and exercise. But this strategy has recently evolved as I became aware of a pair of studies, one by Cook et al which strengthened the sodium argument and one by Larry Appel which weakened his own DASH research.
The Rise of Sodium
The article by Nancy Cook is a follow-up on the Trial of Hypertension Prevention I and II. These were randomized controlled trials of patients with high normal blood pressure which tried to determine which lifestyle modifications were effective. Patients randomized to sodium reduction were given individual and group counseling sessions on how to reduce sodium in the diet. After 18 months the patients in the TOHP I reduced sodium intake by 44 mmol/day (1 g sodium) and blood pressure fell 1.7/0.8 mmHg. In TOHP II, after 36 months, sodium intake was reduced by 33 mmol/day (750 mg of sodium) and blood pressure fell 1.2/0.7. The decreases in blood pressure in both studies are unimpressive.
Cook went back to these studies, 10 years after TOHP I and 5 years after the completion of TOHP II, and looked at the rate of cardiovascular events (primary outcome: MI , CVA, CABG, PTCA, CV Death). They found a 25% reduction in events in patients in the low sodium group (p=0.04) that increased to 30% reduction when the study was adjusted for baseline sodium excretion and weight. These results are incredible to me, modest reductions in sodium intake that were achieved through patient education had negligible effects on blood pressure but dramatic benefits on morbidity. 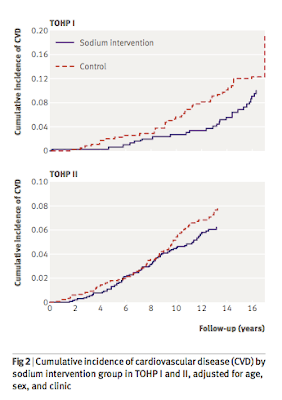 The strengths of this evidence comes from two lines of reasoning:
The fall of the DASH
The DASH Trial (Appel 1997) used a diet rich in fruits and vegetables to provide increased fiber and potassium along with other trace minerals. Low-fat dairy products provide increased calcium while keeping the diet low in saturated and total fat. Participants randomized to the DASH diet were served meals with 4-5 servings of fruit, 4-5 servings of vegetables, 2-3 servings of of low fat dairy and <25%>
The results were dramatic: 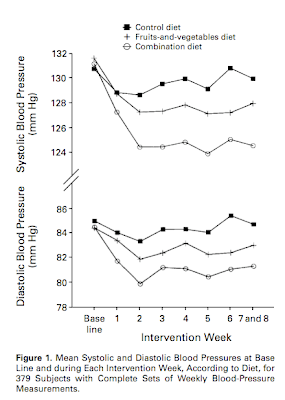 The primary weakness in the DASH trials is that I'm not going to provide my patients with all of their food. It is not a clincally relevent intervention. As physicians, all we can do is educate and cousel on diet. Appel did a follow-up study where he did just that and the DASH was no longer so impressive.
The PREMIER Trial randomized patients to three groups:
Counseling resulted in significant weight loss of 5 kg in both experimental groups versus loss of 1 kg in the control group. There was no difference in physical activity, but physical fitness did improve from baseline all three groups. They didn't find a reduction in alcohol or sodium intake however there was good separation in the potassium intake with the greatest increase in potassium in the DASH group as would be expected. Both of the experimental groups had greater reductions in blood pressure than the control group. 40% of the patients randomized to the Standard advice and 48% of the patients in the Standard + DASH were able to lower their blood pressure below 120/80. This difference was not statistically significant.
There was no improvement in blood pressure control with the addition of the DASH diet over counseling patients on established risk factors. 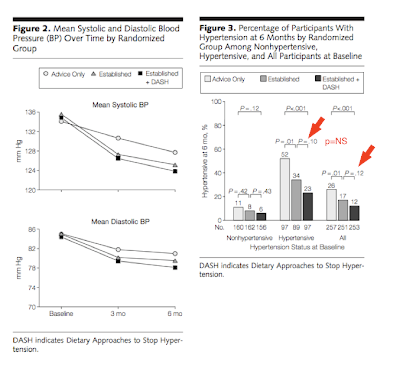