Cool site on eGFR and proteinuria

This Annual Evidence Update has been created to update the evidence presented last year for the 2008 National Knowledge Week on Proteinuria and eGFR. You can read commentaries on the latest systematic reviews, randomised controlled trials and the 2008 NICE guideline on Chronic Kidney Disease, as well as see what evidence has been produced in the last 12 months for the different topics presented last year. Drs David Goldsmith and Edward Sharples have also picked out the Treatment Uncertainties from the evidence, which have been added to the UK DUETs database. 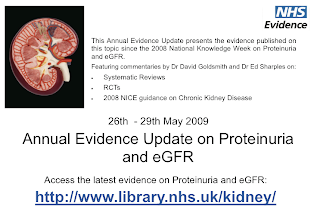