Hong Kong said last week it would test meat, vegetables and processed food for melamine, a move that underlines concerns about food safety in the former British colony which returned to Chinese rule in 1997.

It imposed a cap on melamine in September, restricting it to no more than 2.5 milligrams per kilogram, while melamine found in food meant for children under three and lactating mothers should be no higher than one mg per kg.
The level of melamine found in the eggs was 4.7 mg per kg, the newspapers said.

The newest revelations on melamine toxicity involves vegetables that are sprayed with the insecticide cyromazine. This derivative of melamine degrades back into melamine resulting in the contamination.

Recently, experts have investigated and confirmed that melamine has also been found in lettuce, water cress, tomatoes, mushrooms, potatoes and other agricultural products. There is 17 milligrams (0.000037 lbs) of melamine per kilogram (2.20 lbs) of mushrooms. 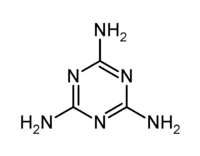